Magic doesn't just happen.  Well...sometimes it does, but not with my highly inspired necklace for Liz's Winter Blues Blue Goldstone Hop.
Upon receiving those magic donuts, I sketched out 6 different necklaces and settled into the one on the left.  I hated it the moment it was done.  I was channeling such a beautiful but brief event in my life and the translation went pretty far wrong.  I was wondering if I chose the wrong man.
I decided to be rational and sleep on it.  Before my head hit the pillow, I came up with a different idea I was SURE would work.  In the morning, I was hesitant to send Old Blue to the chop before I KNEW the new idea would work.  I ventured into my frigid workshop to collect some beads to make a sample necklace ~ the necklace on the right.  I was quite confident this was the way I wanted to go, but needed input before the chop.  So I got my cell phone, snapped the photo below and sent it to Cynthia. She gave positive feedback about both.  So I went for it...TO THE CHOP! 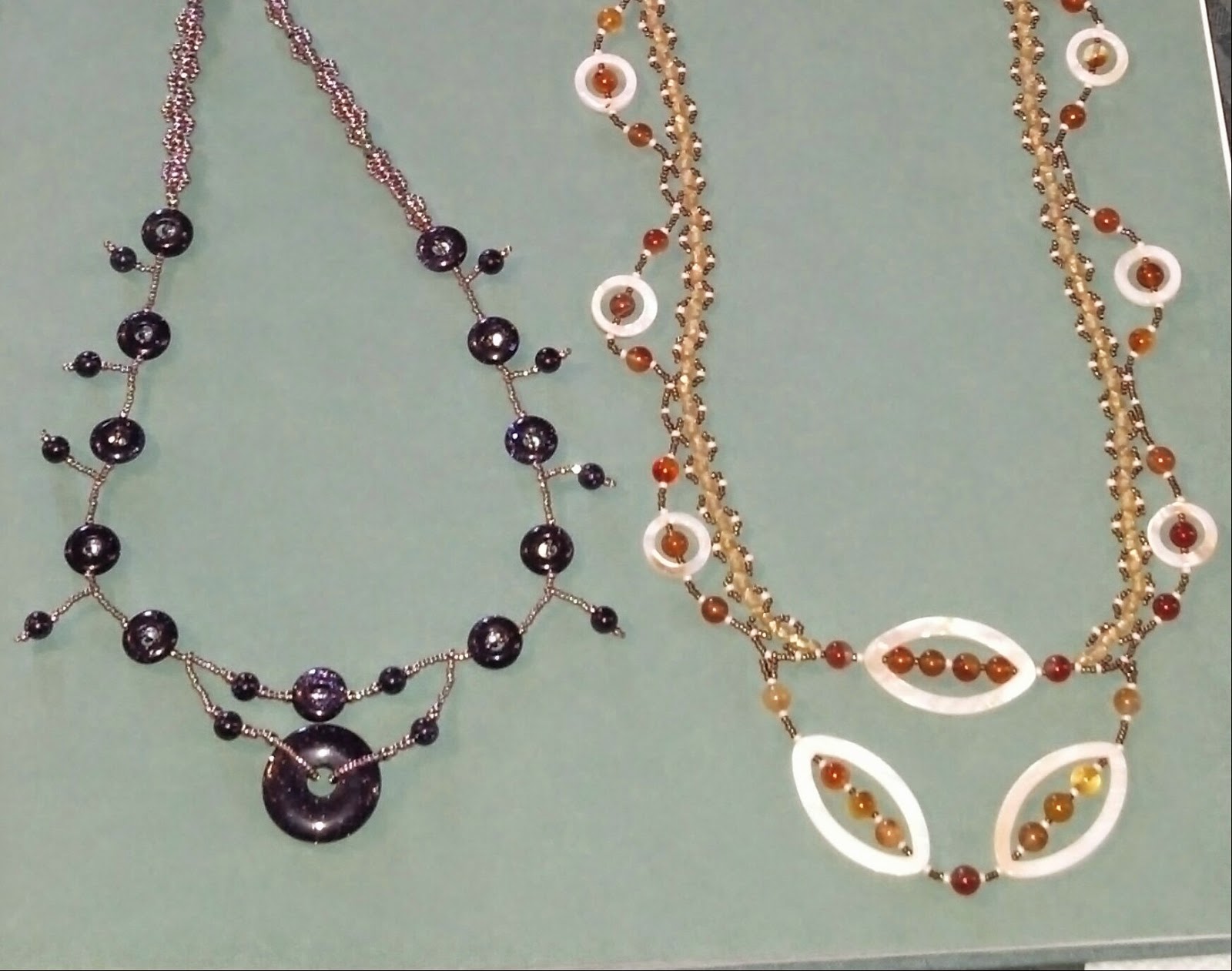 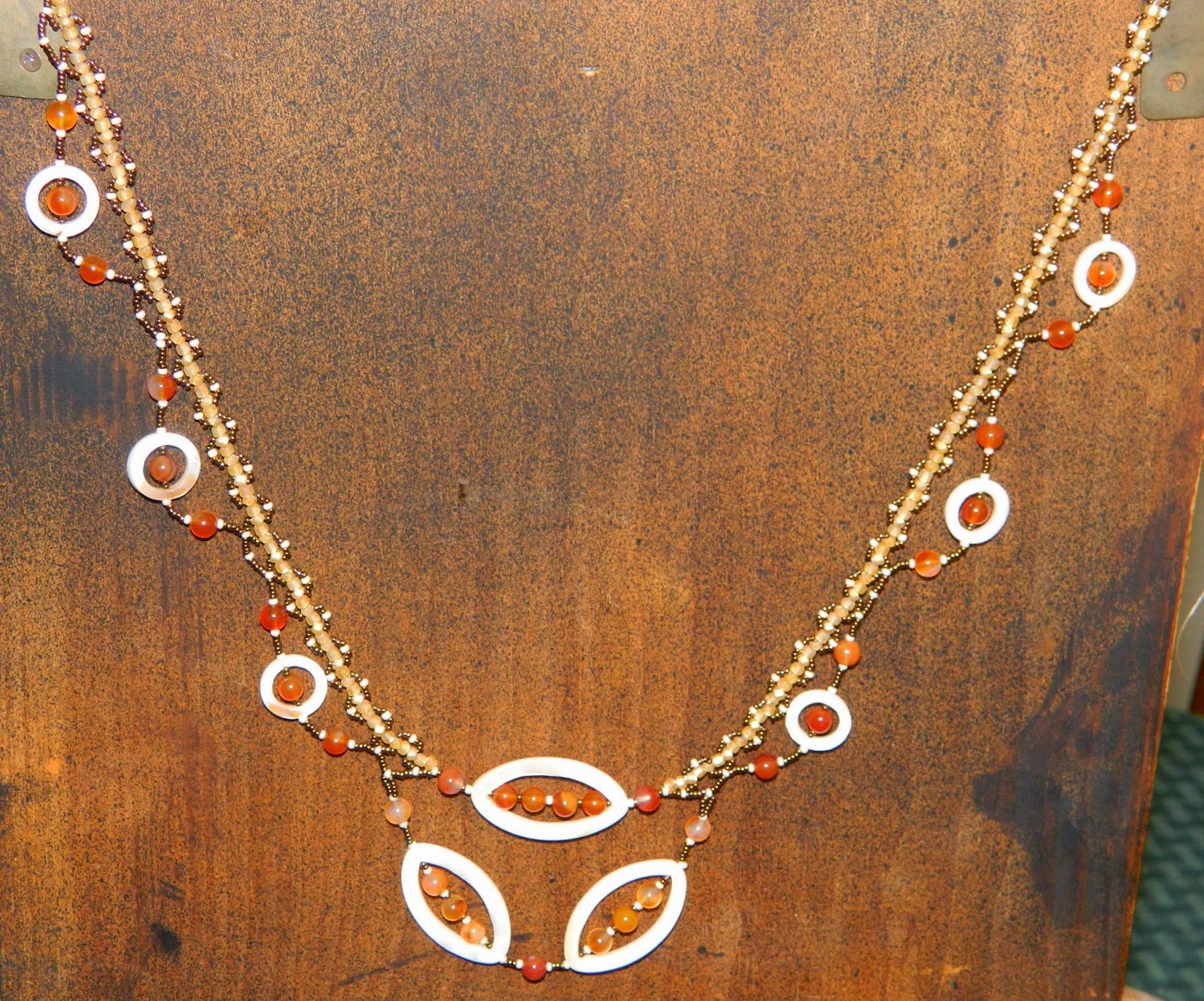 Using the above as my model, the below necklace came to be and did wind up possessing all the symbolism and emotions I was hoping for ~ waves, sound, water, sparkle, movement, peacefulness, and so on (as endless as the lapping waves themselves). 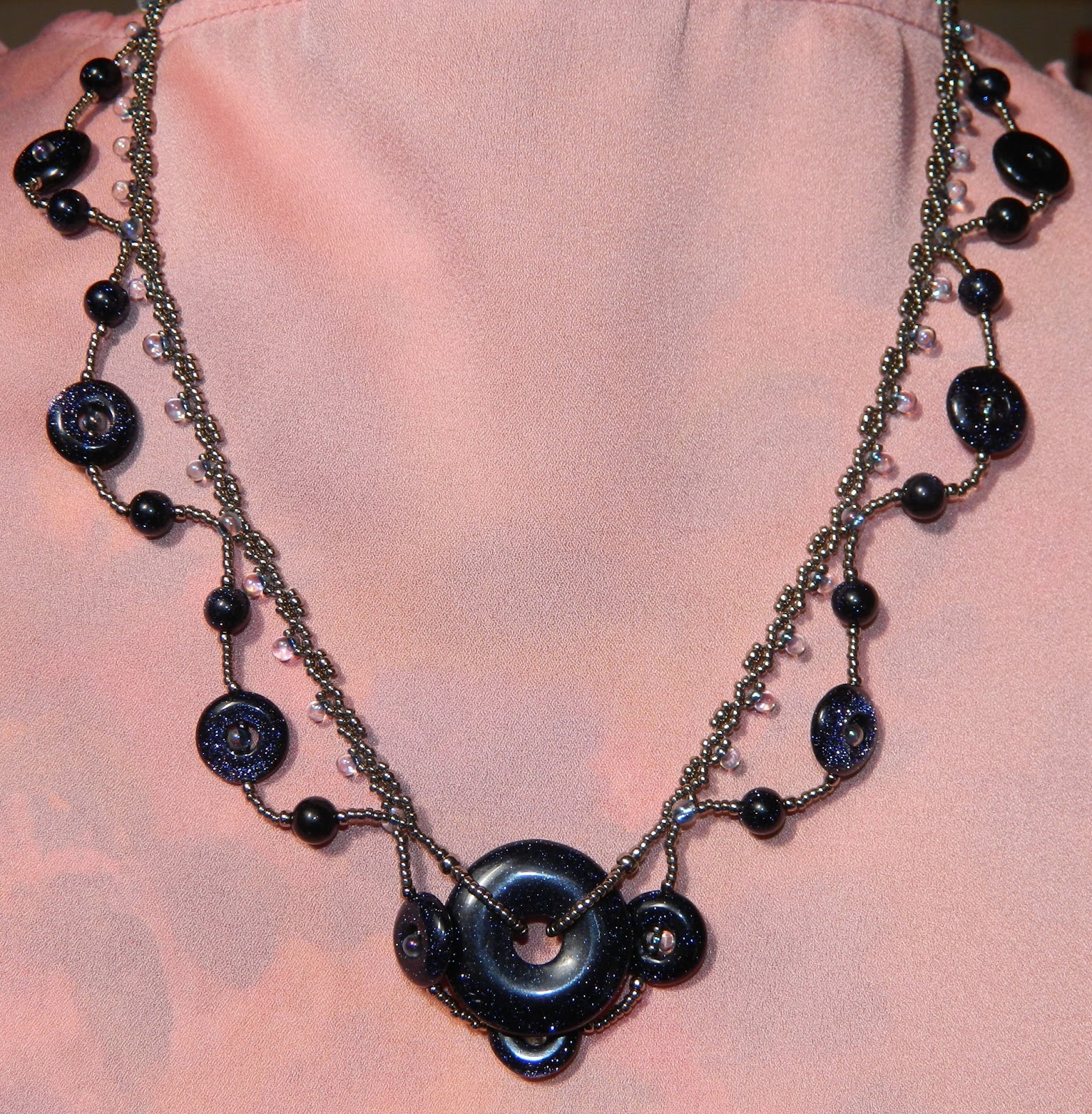 It is always hard giving a completed piece the chop.  There is always the nagging thought of "SOMEONE will want it, even though I think it is ugly."  But it is best to follow your gut when it comes to those pieces that just are not right.  A few times I didn't follow my gut and let the less than inspiring pieces remain as they were.  When I brought them to shows, I put price tags on them that said "Name a Price"  My very first tila bracelet sold that way.  The guy who bought it was giddy at the idea of it and looked at all my price tags to see if they all said that.  He only found one other with such a price that day :-)

For the sample, I will be naming my own price for the tag.  This is definitely one I kept whole because the sample turned out to be a keeper too. 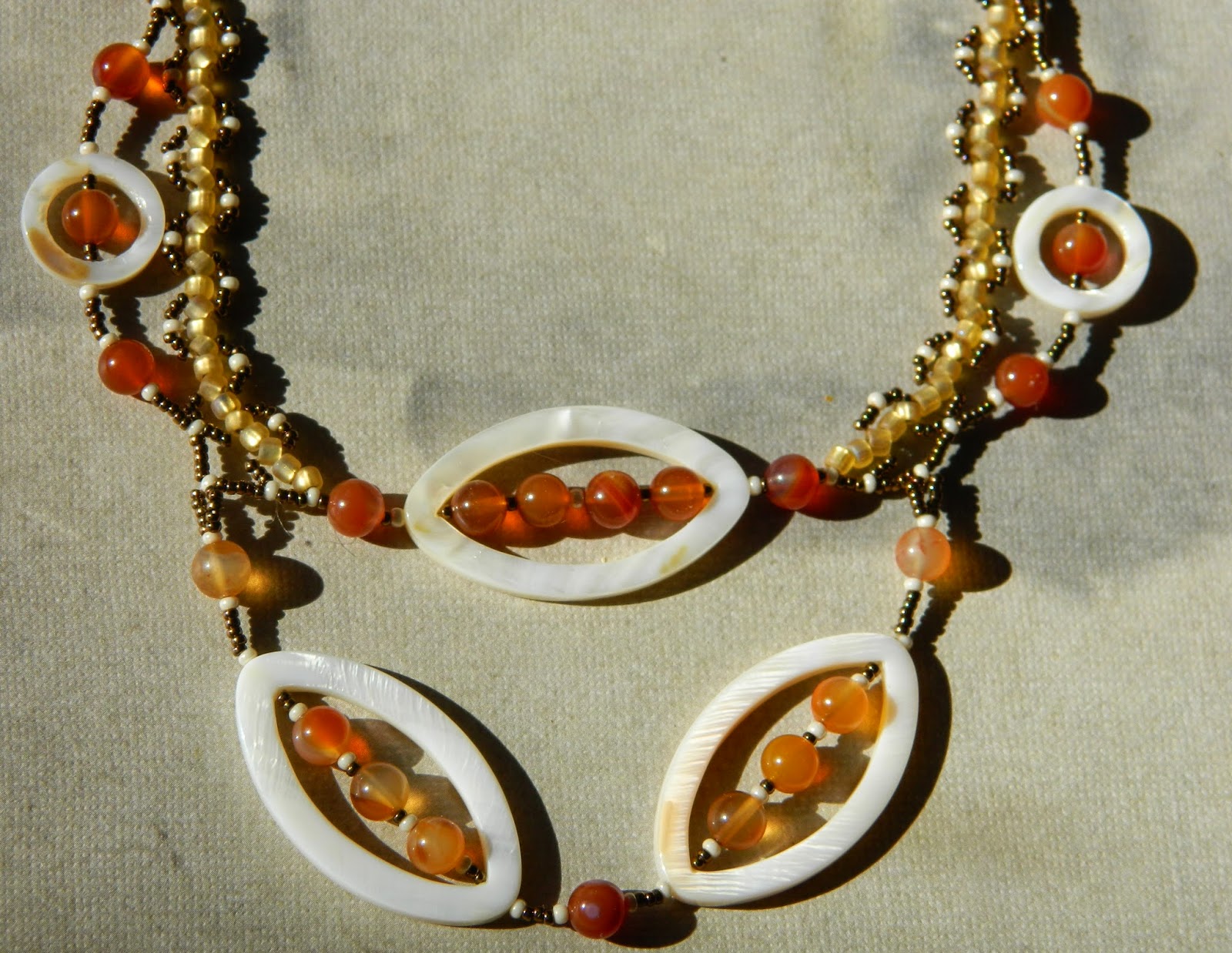 Posted by Christine Altmiller at 11:11 AM

Both the sample and the blue goldstone are fantastic! I love the wavy drama. The inspiration piece is so pretty for the summer. I love the idea of the "name your price" tag for s**ts and giggles to see if someone else would be interested in a piece that is not so pleasing to the creator.

I really dig the way you create... and you!

Always fun to get a chance to peek into someone else's design process. I think in your first design, the side dangles add some nice interest, but can draw our eye away without inviting us back into the piece. With the wave design of the sample and your finished necklace, there's a beautiful unity. I love when a design surprises me with an unexpected element, and those clear drops in your final design make it as magical as the evening that inspired it.

It's funny how that first goldstone incarnation doesn't do much for me. It's fine, but it's not special. It is hard to toss away hours of work, but sometimes it has to be done. I have a box of experiments. Sometimes I have days of work into something that I just can't stand anymore, so I toss it into the box. The "sample" mother of pearl/ carnelian(?) necklace is a definite keeper, it has a sexy tribal feel. I'm really glad you showed it!

You should see my pile of "chopping block" mishaps! Mine is called the"what was I thinking" pile. Instead of just chopping it up and putting the beads away, I am trying to challenge myself into creating something different with the beads. Alas, so much easier to just chop and put away!

Love your process...perhaps if I "made a sample" first, I would not have that aforementioned pile!

Well, I like all of them, but you need to like what you create especially when it's commemorating something special in your life. I'm glad you hit upon a design you really liked. I think it's beautiful!

Having the nerve to chop a completed piece is a signal that you're a confident designer who trusts her gut. And we all have a pile of fugly pieces that looked great in our imaginations but somehow took an odd turn between idea and reality...

The piece with the (guessing) shell and carnelian is really lovely - the marquise shapes keep the flow of the design moving smoothly all the way around.

Where you ended up was indeed the right choice as it gives such a peaceful flow to the piece like a gentle summer night with small lapping of water at the shore.

I have a box of pieces that are meant for The Chop, but just have pulled out the scissors yet. it is a growing pile.

Hi Christine,
I agree with Karin the first one has a disconnect to the fringe pieces they sort of remind me of floats bobbing in the the water. The second design is much better to relate to the magical evening spent at the lake. I love your test one it is so warm and inviting. I am glad you had the nerve to start over. I have so many that I need to take apart and make into something new as well.
Therese

Thanks for sharing. It is always fascinating the process that artists go through in creating their works. I tend to buy multiples when I buy beads, so I keep the poorly executed pieces and start afresh. I do like your final piece much better than the piece you disassembled.