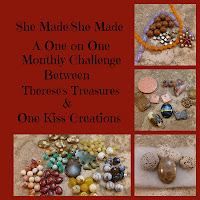 She Made ~She Made November!  It is finally here. And look what Therese picked out for us to work with---A ROCK!  WOO HOO!  Love my rocks!  Lots of $ and time and stress getting my Graduate Gemologist degree and I go and make jewelry out of rocks I find in rivers and creeks and on beaches and, admittedly, some driveways.  The heart wants what the heart wants.  I cannot fight it.

Therese picked out the rock I gave her from the shores of Lake Michigan and the branch pearls I bought the day we met (photo of the pick belongs to Therese).  What a fantastic combination~ I squealed when I saw her pick :-D 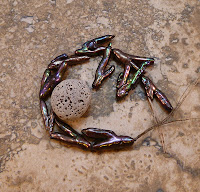 I knew where I wanted to go with these but was not sure I was going to get there.  But I did!  I arrived at my destination, almost as planned in my head.  The only variation was the way I strung the pendant.  I wanted to put some of the branch pearls on the necklace, right where the pendant hung.  But it looked like deer antlers coming out of the rock. And while I love venison, I am weary of being in the middle of hunting season here and didn't want it seeping in and mocking my jewelry universe.

I did a ladder stitch for the base of the bezel around the cab.  Then embellished it with picot and added the branch pearls.  I LOVE IT!!!
Thanks Therese :-D

After you take the photo tour, go see what Therese made! 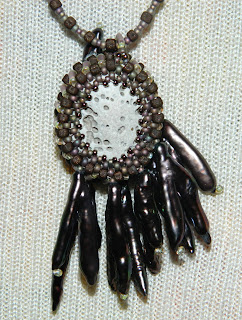 Backside.  Wish my own backside looked this good! 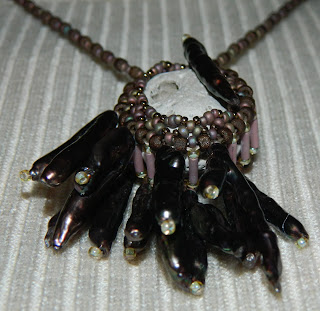 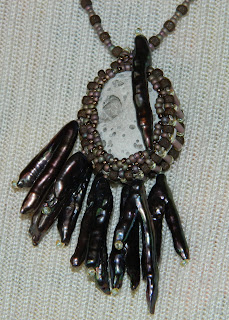 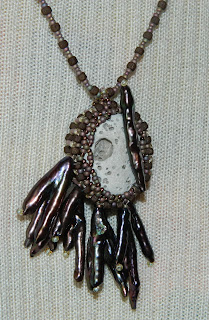 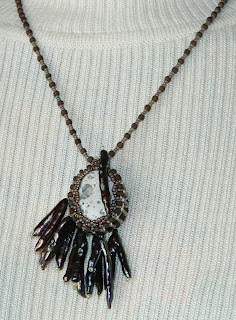 I am grateful for you all.  I am glad we found each other floating around out here in the cyber world.  You have made my good days better and my bad days better too :-)  Thank You!!! 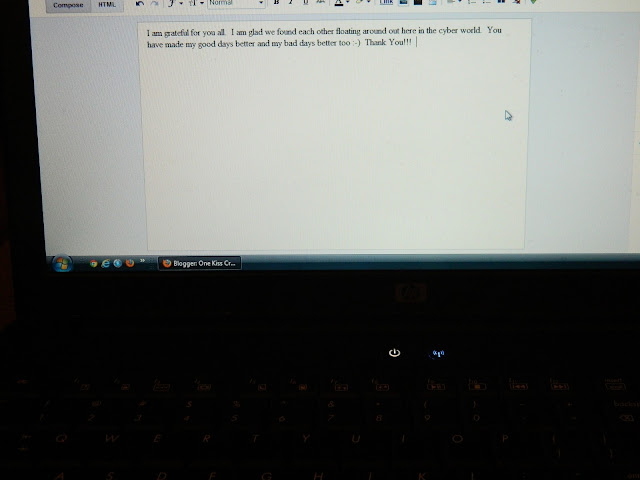 Posted by Christine Altmiller at 12:30 AM 7 comments: 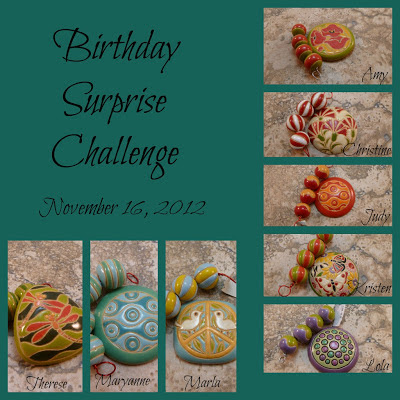 To help her celebrate, she sent 7 of us these gorgeous Golem beads and cabochons to work with.  Today, Her Day, is Hop Day :-)
She also told us that it is Kristen and Lola's birthday this past week too.  Happy Birthday Kristen!!!  Happy Birthday Lola!!!  Hope you had great birthdays and ate something so bad yet so good :-D


Happy Happy Birthday Therese!!!  I know you are working today but I hope you get to celebrate at some point.  Asking us to be a part of your day is a really special honor and I hope we all did right by these beauties you sent us!

For your Birthday, I am sending this right back to you, completed :-)  Surprise!!!  It is going in the mailbox Monday morning (which really probably means Tues or Wed).
I love you, my friend...you are one of the best gifts I have ever received. 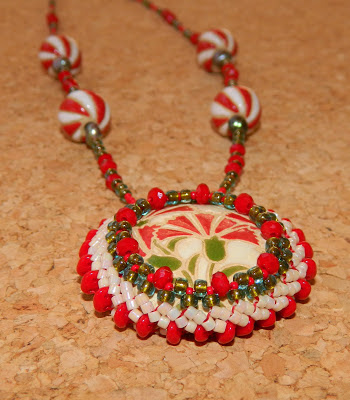 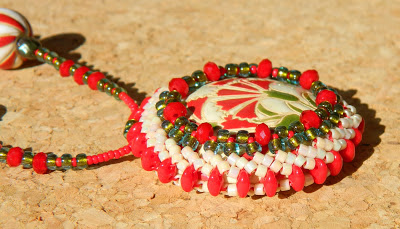 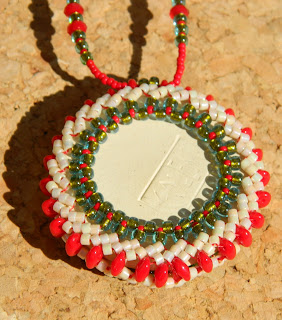 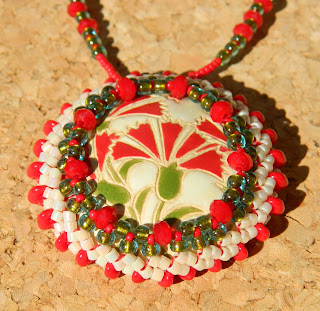 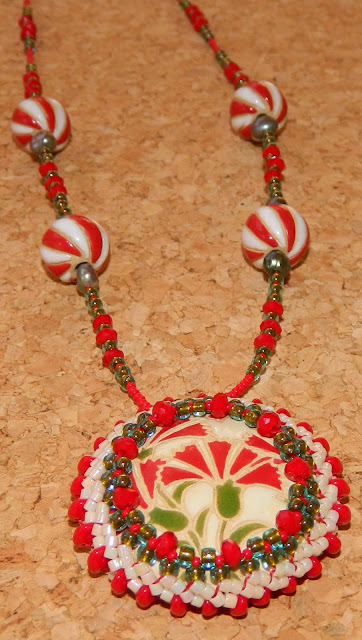 Please Join in the Birthday Festivities and check out what all the Party Goers made with their beads:

Posted by Christine Altmiller at 3:30 AM 16 comments: 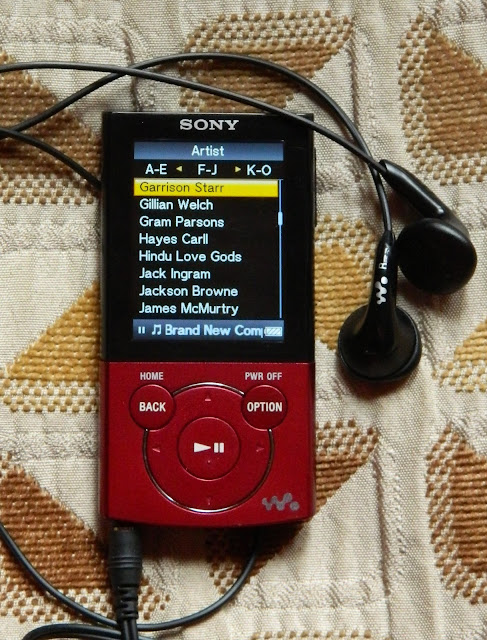 Seriously.  I wouldn't.  This is where the line blurs for me between NEED and WANT.  No matter how broke I have been, I have always had enough money for music (kinda like in college...being completely broke, but always  having enough beer money for Thursday Nights at the Dark Horse).  I still have records, but no player.  I have cassettes.  I buy CDs every couple weeks.  I even have an old John Denver 8-track...again, nothing to play it on.  I have been advised to get various devices and download my music from the internet.  But I cannot.  I need the jewel case and the liner note.  I have to know who played mandolin and who the album is dedicated to.  I have to have every bit of information the liner notes offer.   I have to have the full experience.  I carried around a discman everywhere I went.  It was one of 2 items I took into quarantine when I was undergoing treatment for thyroid cancer (once I was out of quarantine, I had to leave the discman in quarantine for another 90 days.  It was worth it!).  Last Christmas, the Bird Man thought he was giving me the best gift on Earth by giving me this.  I was grateful that he tapped into what really makes me happy, but I was upset and thinking, "He doesn't know me at all!  I am not parting with my CDs!"  So my reaction after opening the gift fell a little flat.  For several weeks, he pushed me to put some music on it.  I resisted.  Finally, after the glow of the holiday season was over, I told him, "Look, you may want me to stop buying CDs but I don't want to stop.  Aside from my favorite foods, my must-haves are beads and music and I feel like you are trying to stop that."  He got very tender and serious and explained I could buy every damn CD ever made--he wouldn't stop me-- and put them all on here and still have the liner notes.  "I just thought it was smaller than your big and very old discman."  Being the child I am, I understood what he was telling me, but said, "I hate earbuds."  Being with me for 19 years, he countered calmly with "Use earphones."  An awkward silence that lasted for minutes with me looking at the floor was broken when I said, "Show me how to put a CD on here.  DON'T DO IT FOR ME---Show Me!"  And he did.  And I think he regrets it.  My kitchen CD player broke not long after this.  So now, when I am preparing dinner every night, I tuck this little MP3 player between my boobs, put the earbuds in (they are not so bad after all), and sing my heart out while I chop and burn.  It drives them nuts :-D


*To learn the origins of Thursday's Thing, click Here.


Posted by Christine Altmiller at 9:00 AM 10 comments:

My aunt is a potter.  She gave me this itty bitty vase years ago.  It is perfect for me.  My house is so small so there are not a lot of places to put big vases full of flowers.  I had  my thyroid removed 4 years ago and I turned 40 the same week---I was living in a florist!  It was really nice and a bit magical for a couple weeks, but for regular livin', gimme small!

When the kids were toddlers and giving me dandelions and buttercups all spring and summer, I put them in this vase.  I keep it on the window sill at the kitchen sink.  I always have and I always will.  Now that they are getting bigger, they pick me mini-bouquets.  I just love the hand selected, yard grown wildflowers and weeds.  And I really enjoy the beauty they see in the late fall.  This flower may be dead, but they still thought it was pretty enough for the Mama's Vase. 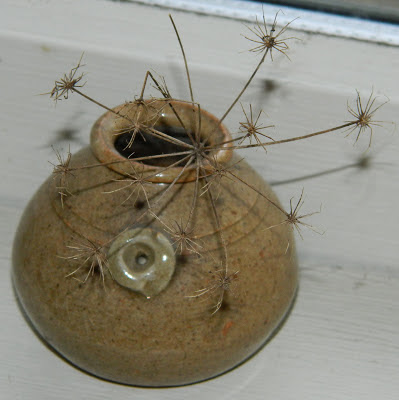 I am thoroughly enjoying posting on Thursdays, for so many reasons.  But the pleasure I didn't realize I would receive is hearing how these little posts are opening up a flood of memories for you all.   I set out to do something for myself with these Thurday posts, and somehow it becomes about something less selfish.  What a joy to hear your comments and then continue with e-mail conversations.  We are all connected in these tiny ways and it is truly a sweet sweet thing.


*if you want to learn the origins of Thursday's Thing, click HERE
Posted by Christine Altmiller at 9:46 AM 10 comments:

Ears to You Blog Hop

Amy Freeland of Copper Diem is hosting today's Ears to You Blog Hop.  A big thank you to Amy for putting this together and for having such a big and generous heart!  Through her Green Bead Designs Etsy Shop, Amy gives 20% of her proceeds to charity.  In 2012 alone, Amy has donated $2,049 to the various charities that can be found on her Etsy Page.
Ears to You is a non-profit organization that offers free earrings to women undergoing chemotherapy.  It is simply to lift their spirits during a difficult time.  What a beautiful gift to give :-)


Earrings are not my forte...I struggle with them and buy other people's earrings rather than make my own, but I really wanted to be a part of this.
Here is my contribution, and I may sneak a few more in the package before I mail it out: 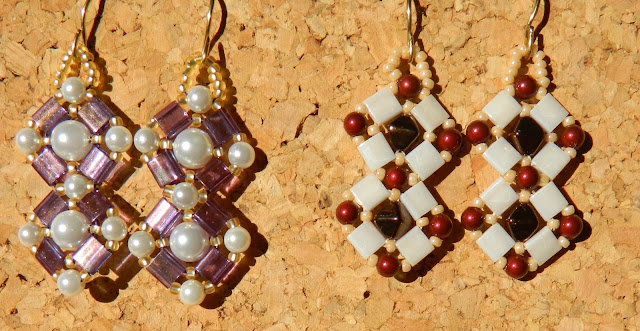 I was thinking of re-doing these to make them only one square long...thoughts on this?!?

Go on over to these other wonderful sites and see what everyone else is making for Amy's Ears To You Blog Hop.  Thanks Amy!!! 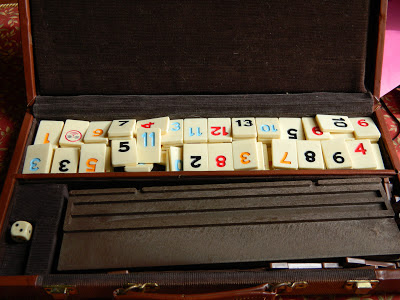 Rumeo.
Or as some call it, Rumikub.
I was raise on Rumeo.  My Gram taught me how to play when I was 6 or 7.   Every week, we spent hours with these tiles and with each other.  We ate M&Ms, drank tea, laughed, talked, and played some serious games.  I am not competitive, except when it comes to cards and Rumeo.  My Gram was the exact same way.  These were the only times in life when we went head-to-head and showed each other no mercy.  But win or lose, we praised each other.   No room for talking smack at Gram's dining room table.  Win and lose graciously or don't play.
My aunt knew how to play too and I played with her sometimes.  There were rare occasions when the three of us played together, but those games would get rather prickly so we would stop at one or maybe two for the day (instead of the marathons we usually played when it was just the two of us).
Then Kevin entered the picture.  He was deemed Rumeo-worthy and would play with us.
One day, Gram presented me with this Rumeo set.  I had arrived!  I had my own tiles that I could take with me wherever I went.  I was overflowing with gratitude and joy.  Gram thought enough of me as a player to gift me with our game!
My parents HATE GAMES.  I do not think I wrote that big enough.  HATE GAMES.  When I was 16 I had a very very severe case of mono (thanks to a boy named Timmy...i guess i had a little to do with it too).  I went for extensive  blood work and they determined mono, with the added bonuses of strep and a rash.  Good times.  One day, Mom came to my bedside with my Rumeo tiles and said,  "Do you feel up to a game?"  I burst out in tears.  I knew I must be dying and that they lied to me about the mono.  There was no other reason my mom would play a game with me.  Once she calmed me down, I was too worn out to play, so I slept for several hours, woke up and taught her how to play.  She only played that one time.  But the moment will last forever.
When my Gram passed away, her Rumeo tiles stayed at her house, on the floor, in the corner of the dining room.  That is where they were kept from the day she bought them.  My aunt moved in to the house and we continued to use the set.  When my aunt passed away and the house was cleaned out,  we gave the set to Kevin.  He was so good to Gram and my aunt, always helping them around the house, popping in just to say hello, giving out hugs and kisses and warmth.  Rumeo worthy.
For several years, I tried to introduce my girls to the game, but it didn't click.  Until this past weekend.  Sunshine Girl kicked our butts.  The Bug wanted to play again and again.  I am keeping the tiles out now.  A new wave of good times and love will be created by sliding around tiles and laughing and seeing those wheels turning as we each try to be the first one to clear our board.

*to find the origins of Thursday's Thing, click Here
Posted by Christine Altmiller at 12:28 PM 11 comments: