The Creative Continuum of Seven ~ May

Today is the Fifth of Seven dates from now through July we will be posting work we made with goodie bags other Bloggers sent us.  Alicia had the idea that we each send out six packages with beads or focals and on the 26th of each month we reveal what we made with a certain participant's package.

I am honored to be in this group of Seven...these ladies are a creative bunch.
Participating in this Event and their Package Month and theme are :

Monique of A Half-Baked Notion  :  January ~ National Gallery of Canada

Moi  :  February ~ Round and Round

Therese of Therese's Treasures  :  April ~ Lucy in the Sky with Diamonds

Alicia of All The Pretty Things (and the brains behind this lovely continuing hop :-D )  :  May ~ Seasons


Emma of A Polymer Penchant  :  July ~ not sure if Emma picked a theme but I would say, Beauty!


Alicia, the brains behind this hop, sent out cabs and rounds.  I have worked so much with cabs lately but am woefully uncomfortable doing so.  But I am super proud of what I made here.  I had it completely finished back in February, eagerly awaiting the May reveal.  The whole time I was working on it, this poem kept looping though my head.  It was a comfort and offered guidance and fit the Seasons theme perfectly : 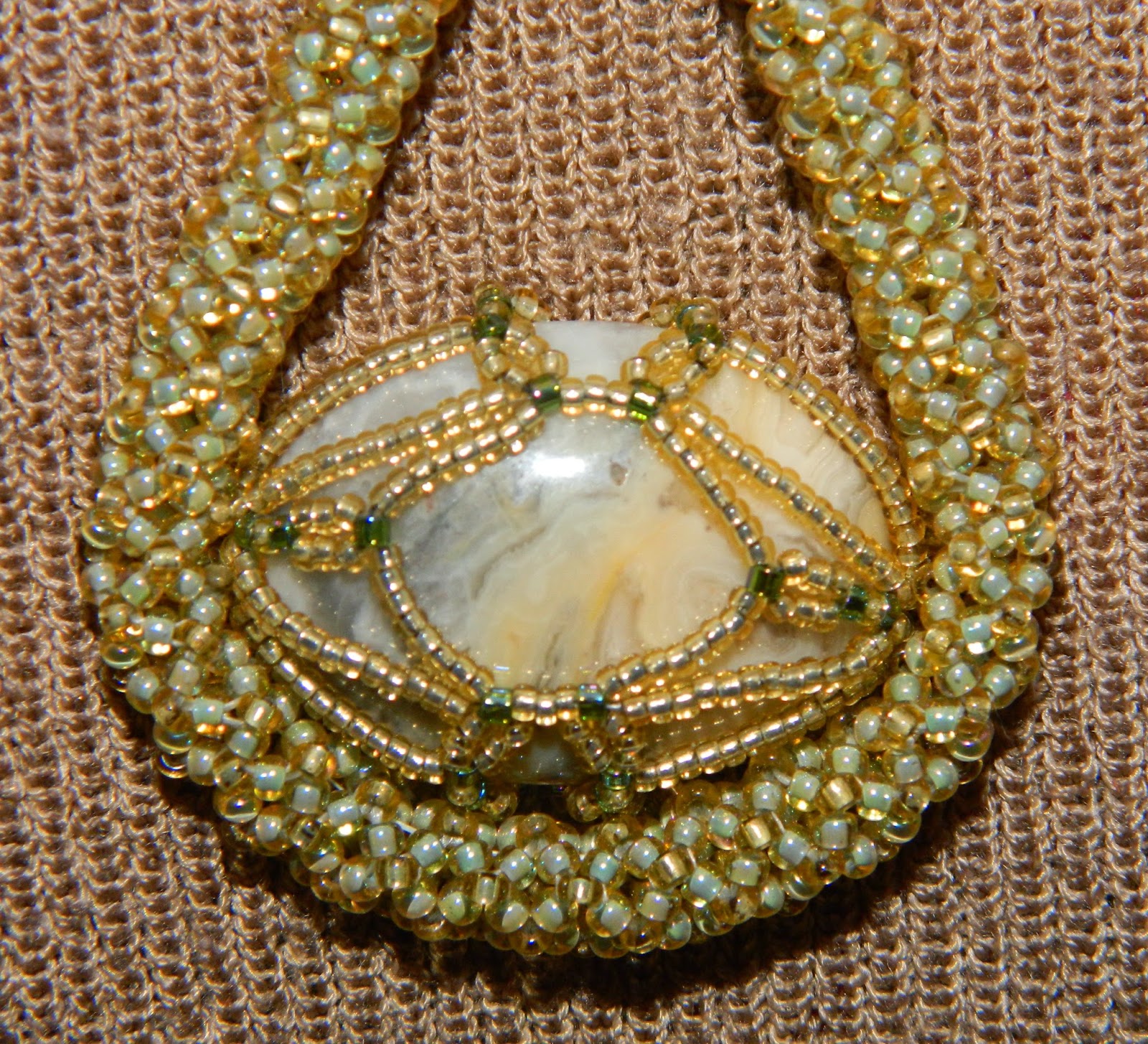 Nothing Gold Can Stay
by Robert Frost

Nature's first green is gold,
Her hardest hue to hold.
Her early leaf's a flower;
But only so an hour.
Then leaf subsides to leaf.
So Eden sank to grief,
So dawn goes down to day.
Nothing gold can stay. 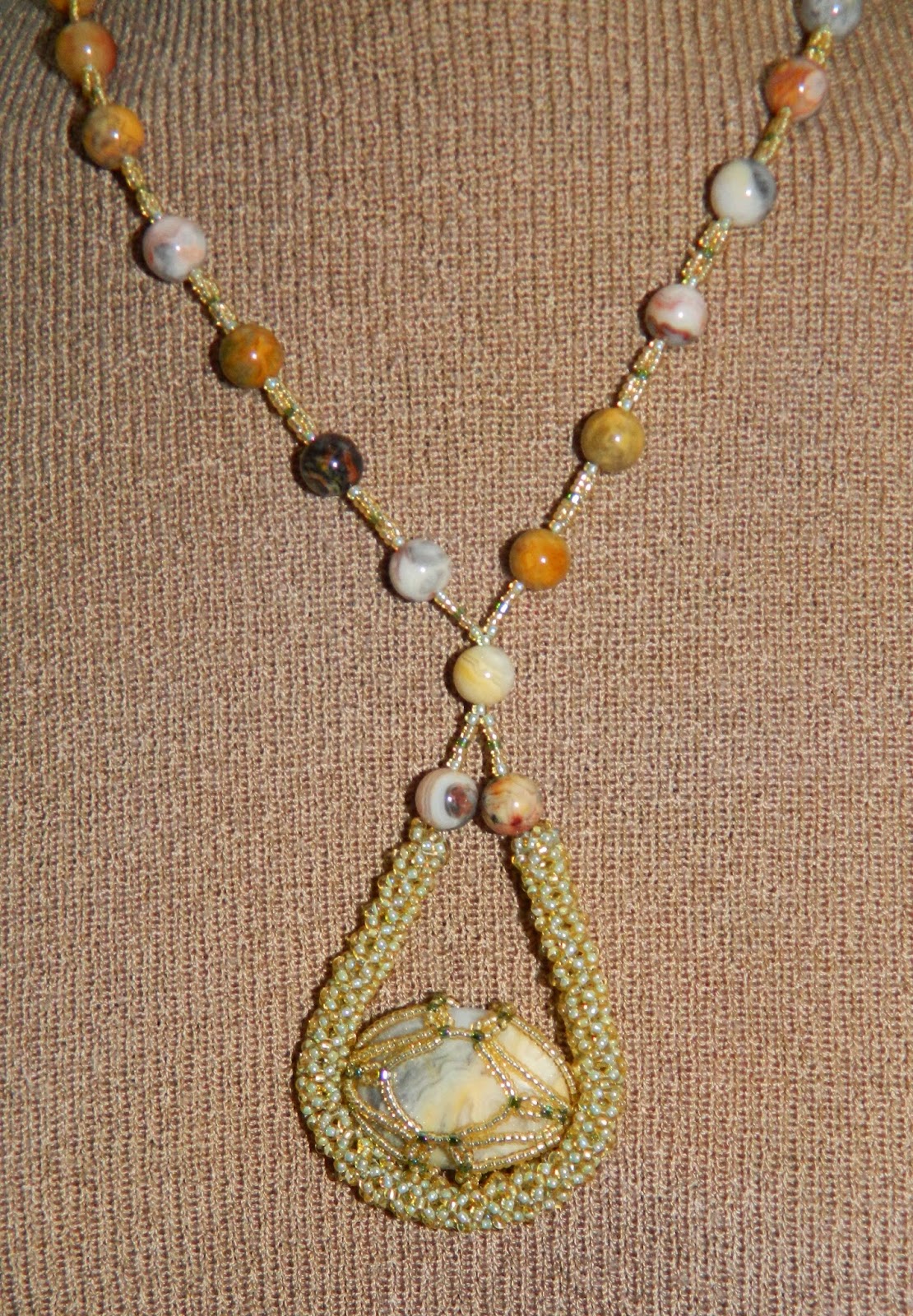 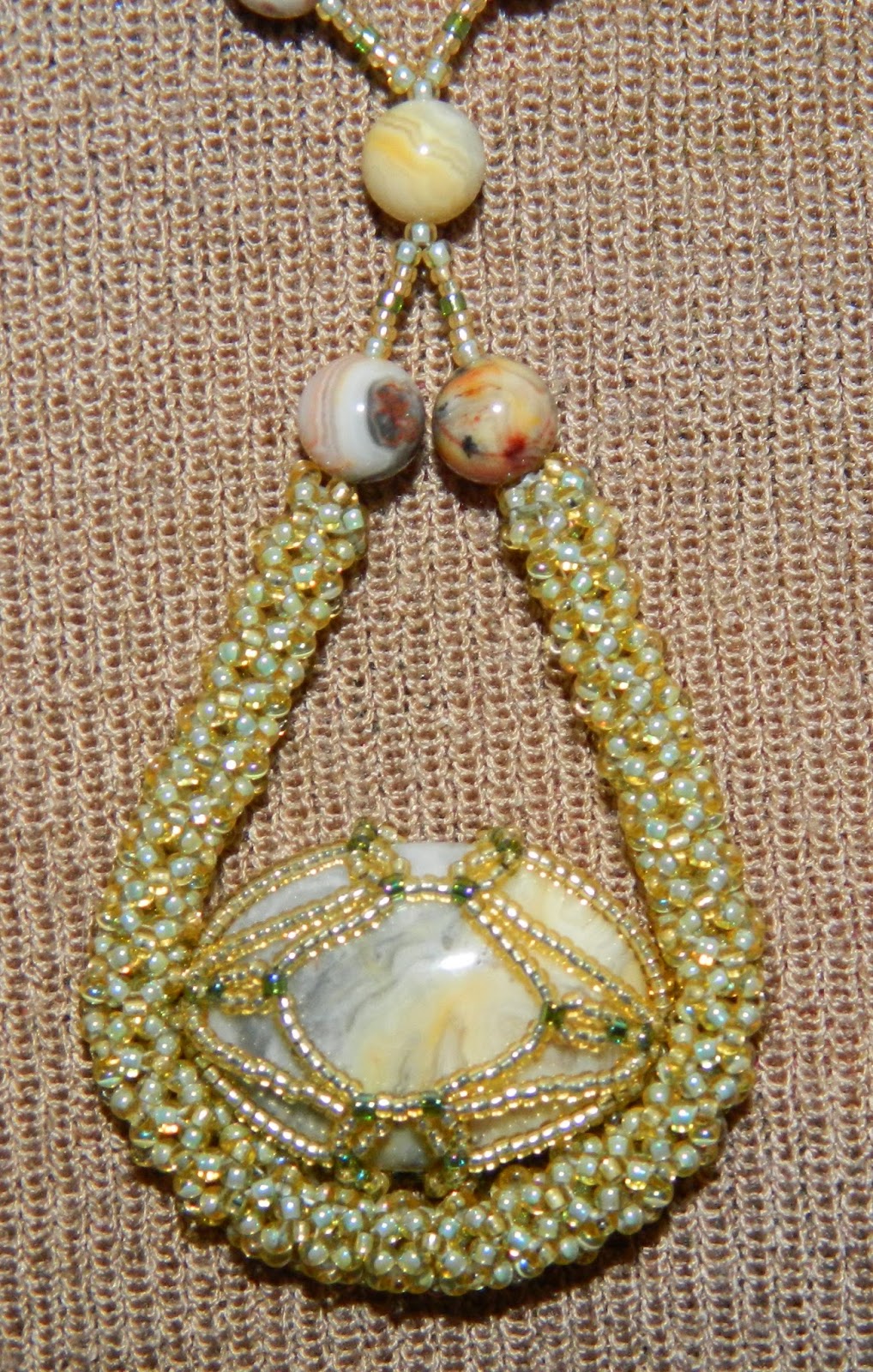 The rope is chenille stitch.  I made it as a bracelet for the ATTS hop in January, but there wasn't enough there there so I pushed it aside for a undetermined future project.  This wound up being just the right project.  The colors were just the right green/gold understated look I wanted to quietly support the cab. 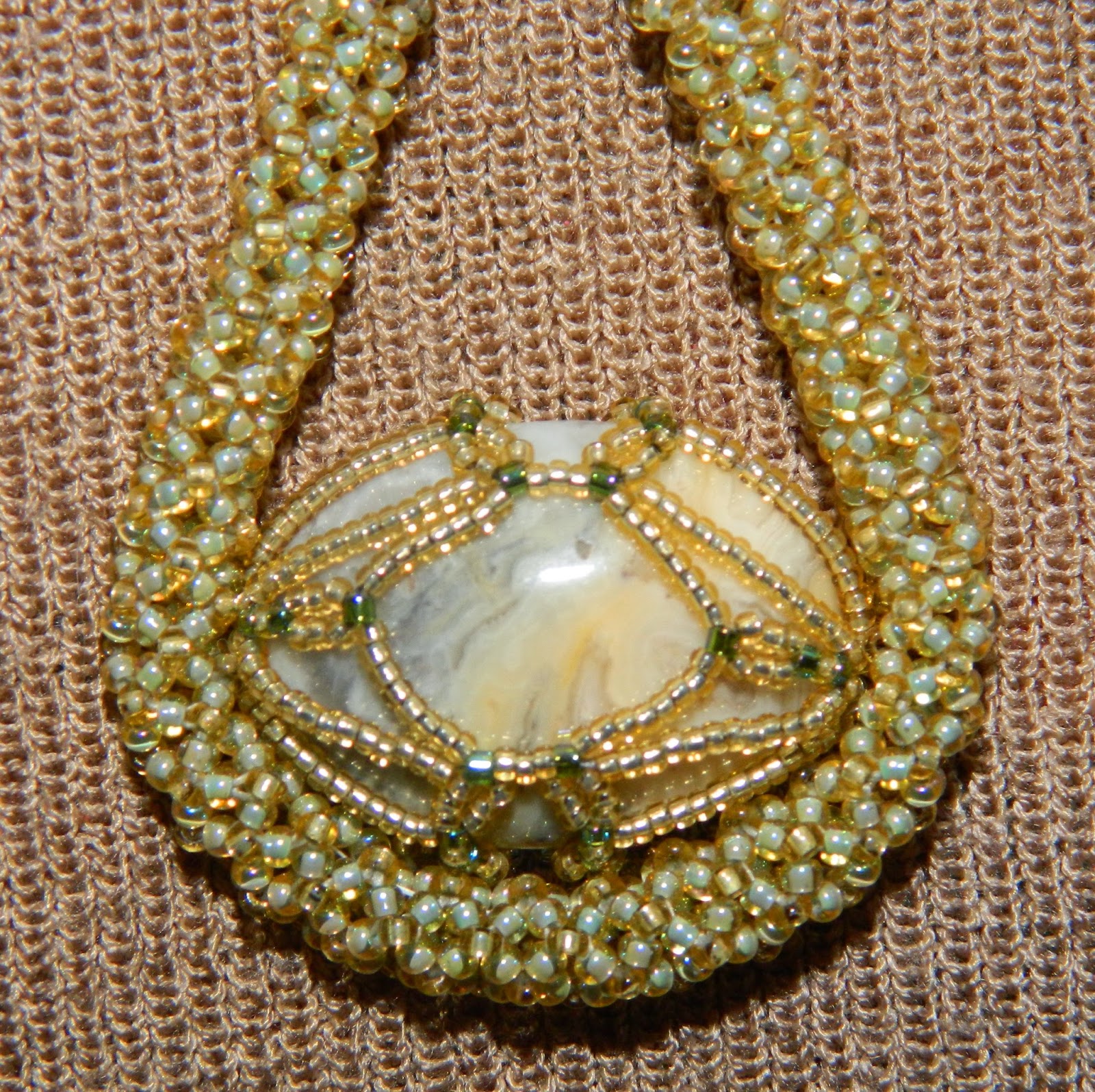 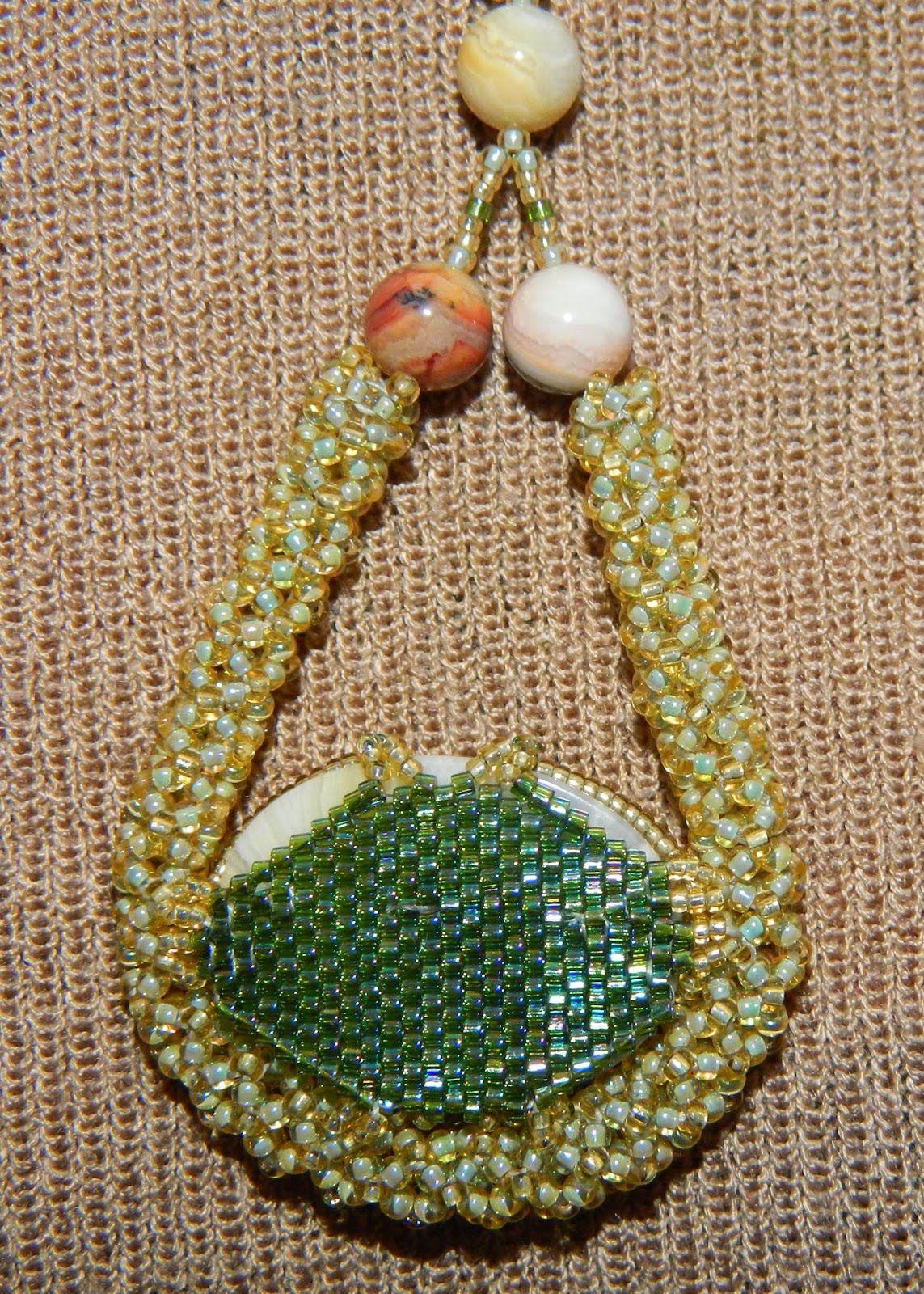 On the back of the cab, I made a peyote/brick swatch to hook the frontal netting onto.  Worked perfectly!  I will be implementing this technique much more often :-)

Thank you Alicia, for the goods to make this happen...and for the wonderful idea of pulling all seven of us together!

Posted by Christine Altmiller at 12:30 AM 18 comments:

WTFriday?!!? Gaia the Goddess Continues to Give Me Grief

But really, is that any wonder, given the winter we have had?  And Spring hasn't been much of a joy either.  But I am not here to talk weather, I am here to ask for opinions about what you think of the necklace in this post (i accidentally just wrote "pissed"...Freudian slip!).   I posted about Gaia and how she came to live with me here .  We have had a bumpy ride together so far.  She gives me fits!  In the midst of a uber fit, I ran into a box and the lid popped off and this necklace was inside.  I had one of those "your peanut butter is in my chocolate/your chocolate is in my peanut butter" moments.  What if I took apart the bouquet and the flowers became a part of Gaia?  What if I did?  So I did.  Here is a rough draft.  What do you think? 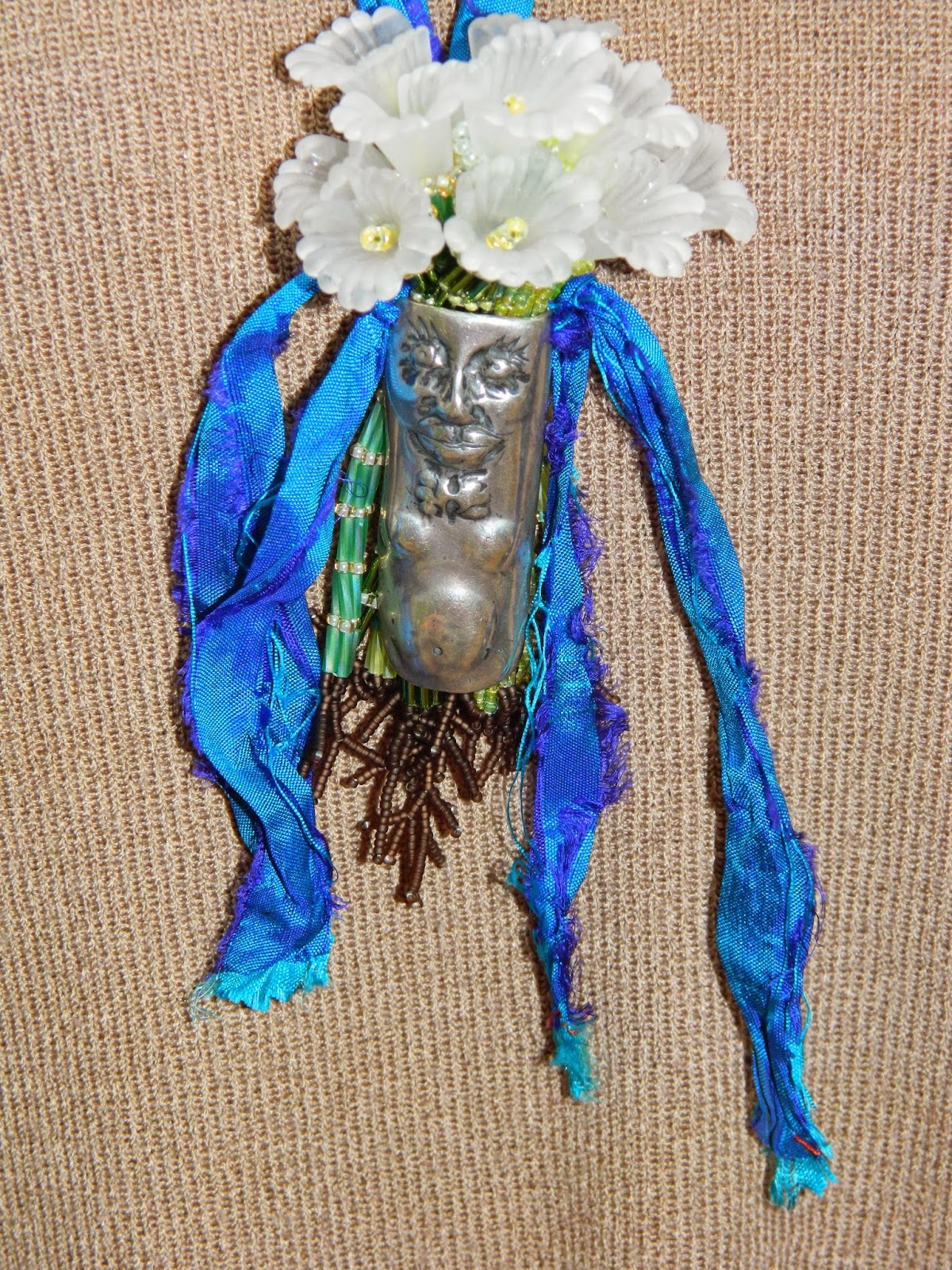 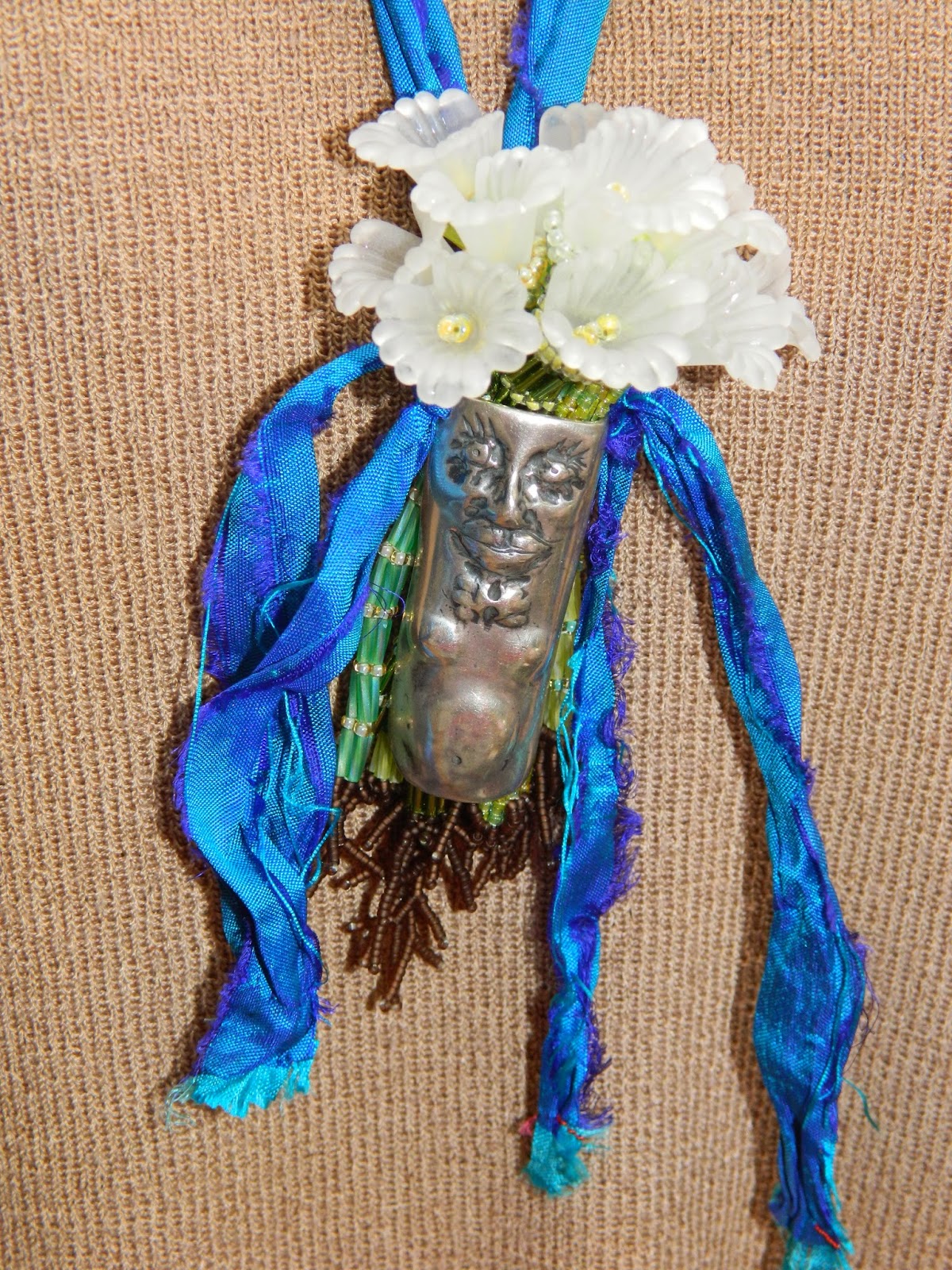 Large eyes, large lips, ginormous thyroid, nice boobs, nice round belly...I am not attracted to her as a whole, but each individual part of her I love. 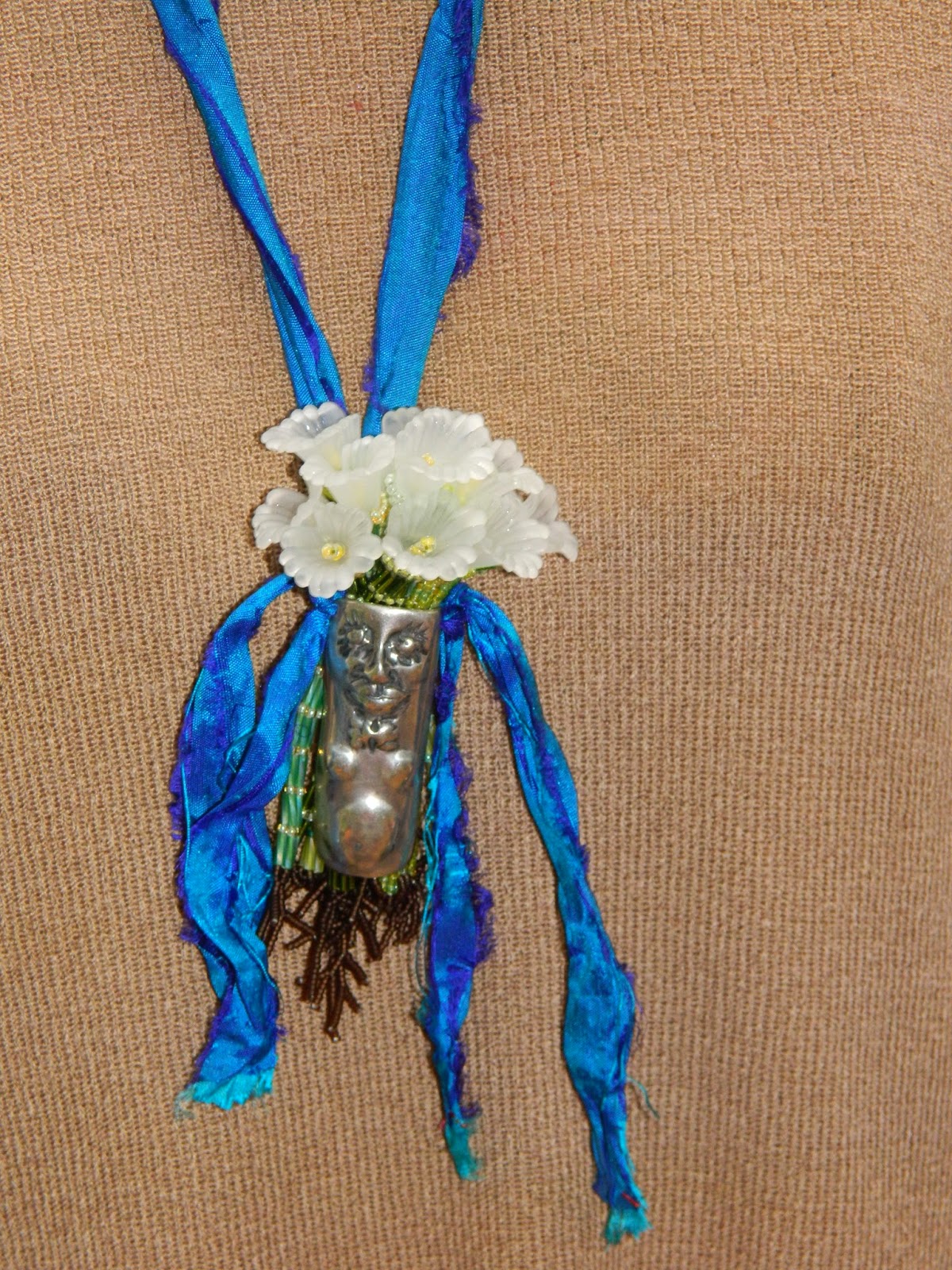 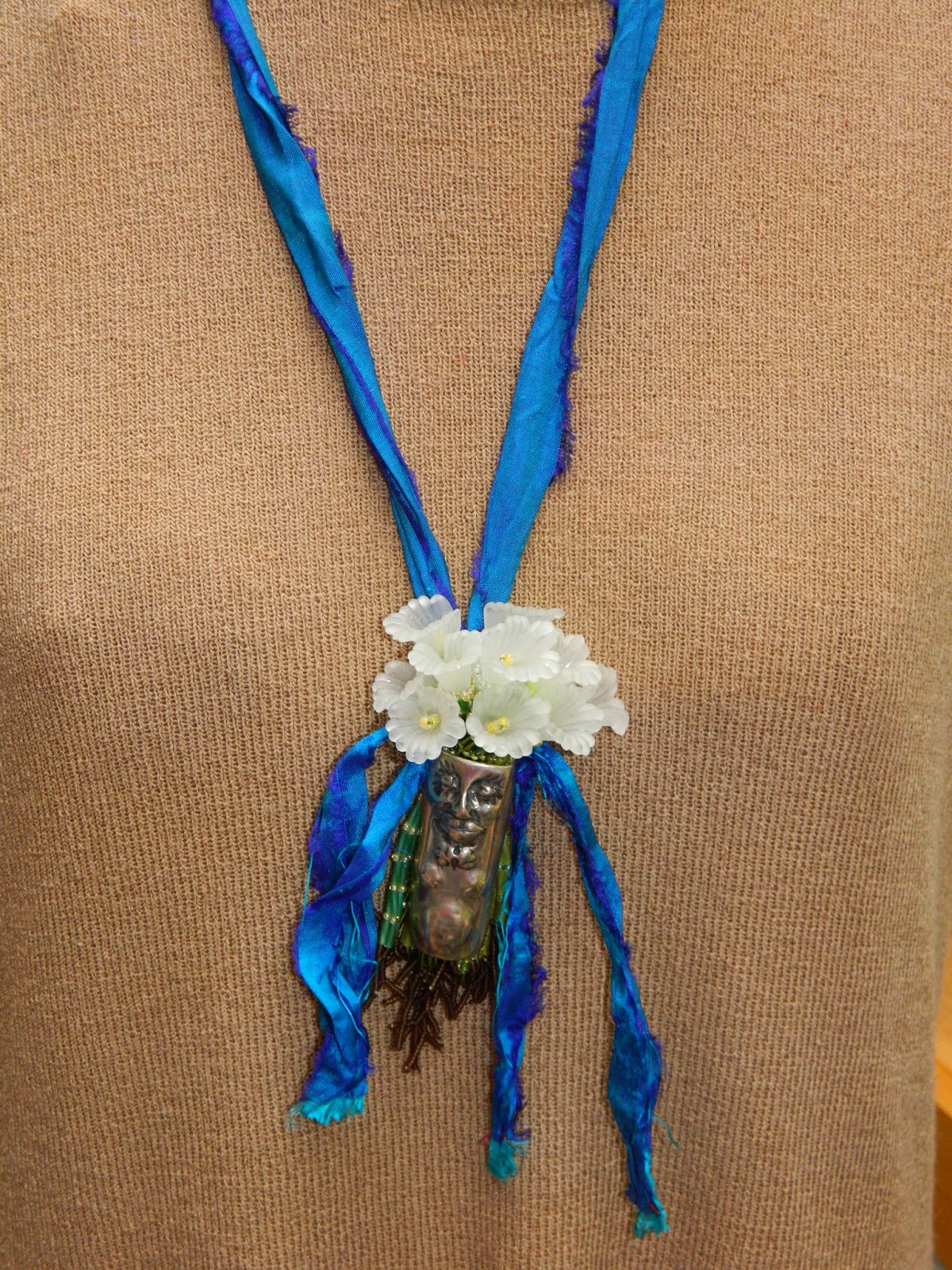 Posted by Christine Altmiller at 12:30 AM 11 comments:

My Bug, The Huntress 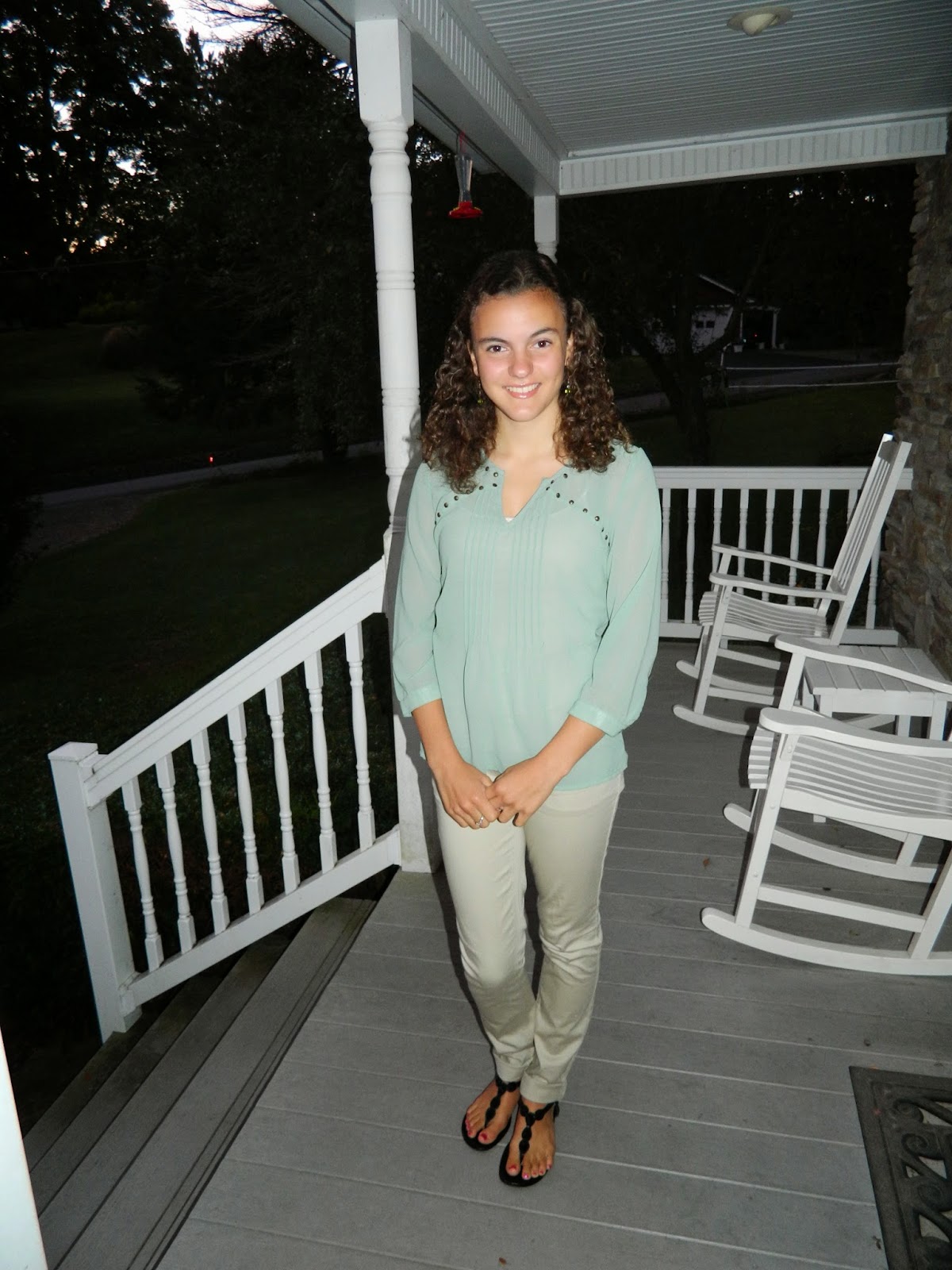 Sunshine Girl was the star of the last post.  This time it is The Bug.  But there is some backstory before it is her time to shine here.

(WARNING: This photo on the left, showing The Bug how she looks on a daily basis, is the only non-graphic photo on today's post.  If you don't want to see the rest, leave now.  I won't mind.  The upcoming photos are from cell phones, so the quality isn't the best.)


When I was living the frolicking life of a single girl in the Rockies, I was a vegetarian.  It wasn't political, necessarily.  It was more because I didn't cook and I wasn't fond of the taste of meat.  It was just easier for me to be a vegetarian.  Back in the day, none of my friends were hunters.  The thought of it never crossed my mind, except the one time my companion and I were backpacking and we ran into hunters.  And then, my only thought was that my clothes were brown and tan and that was probably not good. My pack was colorful, so I hoped that was enough.  We survived the hunters, but the cattle that tore through our campsite caused quite a bit of damage.  Fast-forward to when I met the Bird Man on a trip back East.  The first thing he told me was that he is a hunter.  I realized then that I did have an opinion about hunting, and it was not a positive one.  He took a lot of time and patience to talk with me about why it is necessary for the environment, that he eats the animals he hunts, that his dad was a retired game warden and he and his friends are always safe and legal in their approach to hunting.  I returned to the Rockies with lots to ponder.  I was hot for this guy, but he hunted.  And he lived back East.  Two huge strikes against him.  Well, here I am...been with him for nearly 21 years now.  And the first meat I ate after several years without it was a quail/woodcock/duck/goose/turkey medley.  And holy crap was it good!  One of the last things I gave up when I stopped eating meat was elk.  So I could not wait for him to cook venison for me.  And when he did,  that was probably when I decided to stick with him for the duration.  But all these years later, I still tuck that part of him aside and don't acknowledge it much to people I don't know very well.  Not fair to him, I know. 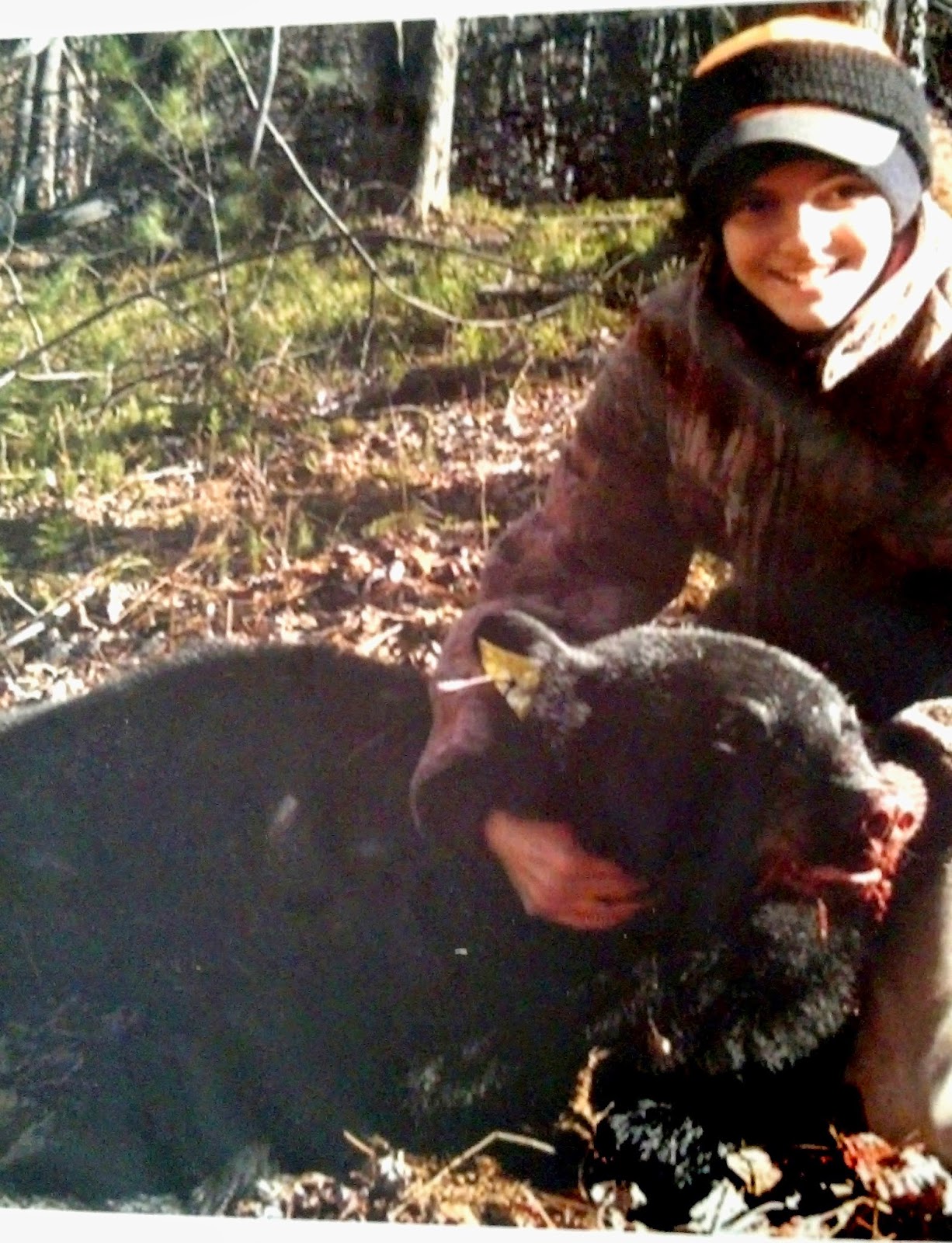 So when The Bug decided in Fall of 2011 that she wanted to go hunting, I was not happy, scared, and in denial.  But I figured it can take years for people to become good hunters and she would probably get bored and give up before she ever shot anything.  I did try and encourage her to use a bow like her Dad, but she wasn't interested in it.  More worry.  But with her Dad as her teacher and some classes and tests under her belt, I knew she was as safe as she could be.  Her first big hunt was in bear season.  The Bird Man has been hunting his entire life and only got one bear, so I wasn't too worried.  She is always Golden so I should have known better.  We got a pressure cooker not long before she got the bear.  Holy Crap.  People in the family were begging for more when we cooked it for them. Tender, dark, delicious.
She always makes sure her nails are painted and she has earrings in before she goes hunting.  Always a lady.  She skinned the bear, cut off the fat, cut up the meat and wrapped it.  She is not squeamish in the least. 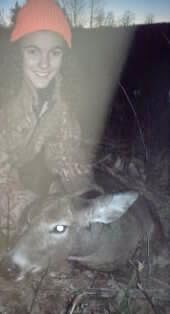 Then she got a deer in 2012.  She processed the whole thing with the Bird Man again.  He does the cooking but she is hands on in everything else.  She is the only female who hunts with The Bird Man's friends.  They all have a tremendous amount of respect for her.  A lot of them are older than we are and they tell the Bird Man how she breathes new life into the group.  Her personality and her sweetness are comforting and infectious to all who know her.  She is truly golden. 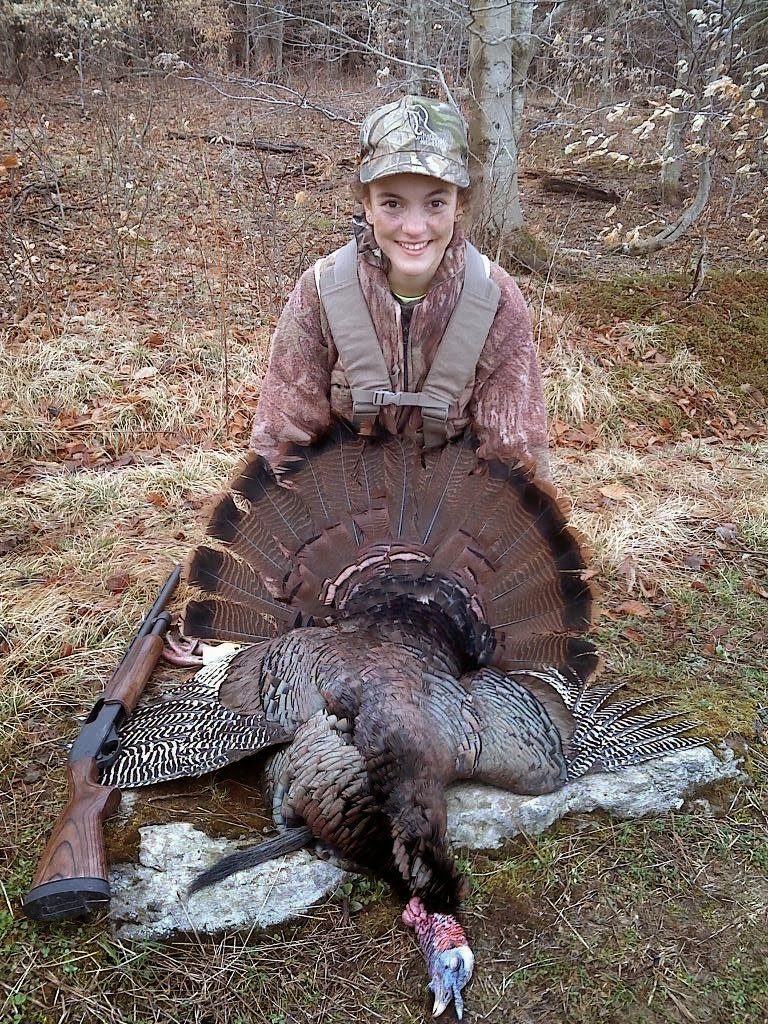 I thought maybe the bear was given to her by the divine intervention of her late game warden grandfather.
I thought maybe the deer was a lucky shot too.  But then when this happened, I had to admit that The Bug is probably a good hunter.  But I still had my doubts. 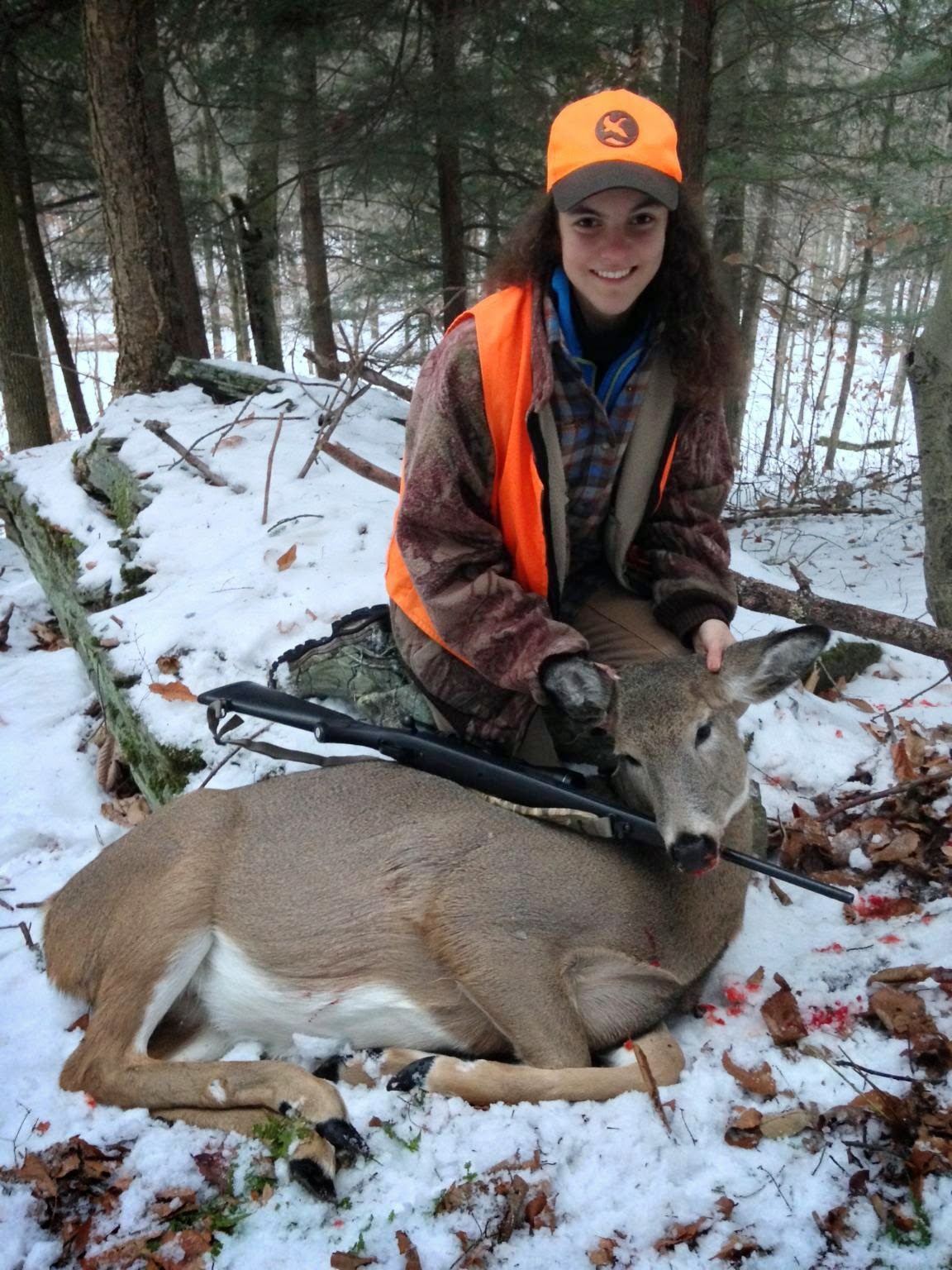 Deer 2013.  Impossible to deny the strength of her skills now.  This deer provided a lot of meals, most recently last night for Mother's Day dinner.
Sitting down to meals that came from the garden and from the healthy woods around us...it is hard to think of a better way to eat.  Not all meals are that quality, but we sure savor the ones that come along.  At some point in the meal, one of the hunters asks "Who eats better than us?!"  In unison the rest of us say, "No One!"
(our other motto, coined by Sunshine Girl : We clink before we drink) 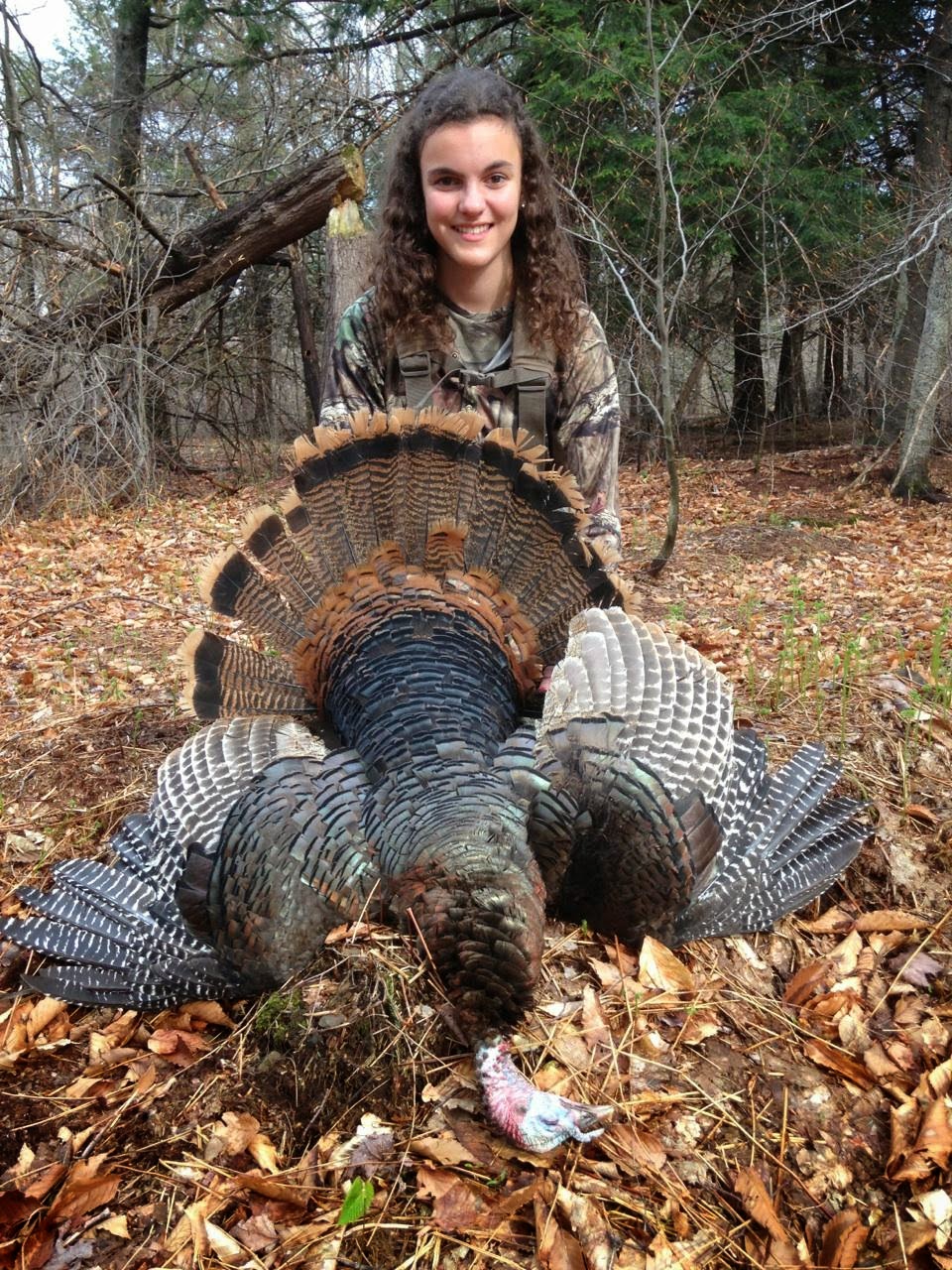 And the photo that prompted me to write about this...Turkey 2014...harvested 2 days ago.  That was the first time in this house something other than fish went from field to fork in 12 hours.  It was incredible.
The Bug is so much more than a hunter and I think I take the easy way out and focus on those other sides of her and tuck away the hunting, which isn't right.   She is a runner, a violin player, the most gracious sister/daughter/granddaughter/niece/friend, a helper, a near perfect student, a care giver, a good listener, a loyal person, and a very accurate hunter.  Should she ever abandon the finer things she likes and live off the land, no doubt she and her family will never starve.

Like a lot of people, due to conflicting thoughts,  I enjoy the benefit of the meat without fully acknowledging how it got on my plate.  I need to stop being hypocritical and embrace what my family does.  I never thought I would give birth to a hunter, but...ya just never know what life hands you!

I love my Bug and Huntress she has become.

Posted by Christine Altmiller at 11:37 AM 14 comments: