Week Two ( I Guess Last Week Was Week One ) : Reflections and Shadows

I am winding down Week Two of the Artist Way by Julia Cameron (if need be, check Week One to see what this is about).  Two Weeks in and I am not behind, so I am already doing better than the first time I did the course!  Go Me!

Among the many tasks this week, I had to come up with 5 MORE dream careers.  Two of my five were Bread Baker and Photographer.  I just didn't have it in me to Bread Fail this week.  I Bread Fail each time I try and make it.  Yeast is not my friend.  I have always had a deep and unwavering love of bread.  If I had to, I suppose I could live without cheese (can you even imagine?!?), avocado, grapefruit, coffee, and yes ~ whiskey.  But I could never be without bread.  When I go to Farmer's Market, I usually have half a loaf finished before I get home.  It is a comfort, a friend, an aphrodisiac, a meal.  NOTHING beats a good loaf of bread.  I was raised on Arnold's Thin White so when I had bakery bread for the first time.....well, use your imagination, then blush.   Someday, I will hit on the recipe that works for me.  This week wasn't going to be that day.
I picked up my camera to play Photographer.  Batteries all dead.  Cards all full.  I only had time to go to the pharmacy for a new memory card.  $35. W.T.Friday?!?  So...I came home, deleted a bunch ( I really have to get back to the "...was..." series because I have hundreds of photos of abandoned structures!) and started taking photos.  I will try and get to Target next week for a card devoted to playing Photographer.  Because I cannot get a series out of my head ~ Reflections and Shadows.  It is probably not very original, but it has been swirling around my brain for a while now.  We'll see how that goes.  Here is a reflection shot with no editing.  I call it : Tree in Coffee (hahahahaha). 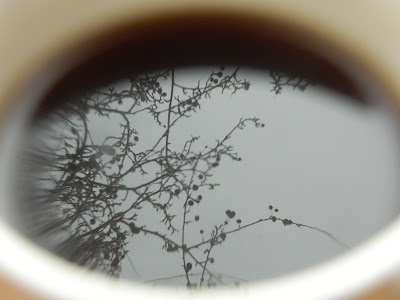 I actually took a few photos of my bookshelf reflecting onto my closed computer.  And a grapefruit half reflected onto a spoon.  I was going to post those.  They were eh, but it was a start.  As the photos were opening on the computer, I reached over to the windowsill to get my coffee and saw this.  MUCH better.  The course talks a lot about when you put your wishes out to the universe, opportunities start presenting themselves.  Many things have happened this week to make me believe that.  And this Tree reflection is just a small symbol of that.

Another task was to make a list of 20 things I like to do and the dates I last did them.  Some were 20 years ago!  The follow up task was to pick one and do it.  Due to the weather, I had limited options, so I picked read and write poetry.  Yesterday, I realized I was probably going to fall short of that task.  So instead of reading my treadmill book (Centennial.  Cynthia, one solid year later and I am only a third of the way through.  But I do love it...finally!), I read the first 30 pages of Leonard Cohen's The Book of Longing.  I read it out loud.  Leonard...now he could dance me to the end of love.

This week, my Artist Date was The Danish Girl.  What an emotional and beautiful movie!   The self awareness, bravery, love, and trust depicted in this quiet film was a loud shout out to being true to yourself.  The relationships were strong and meaningful, the scenery was sparse and lovely on the water in Copenhagen and decadent in Paris.  I read a bit about Lili/Einar and Gerda Wegener after the movie.  She was so incredibly in touch with who she really was and who she needed to become.  What a spirit and what a pioneer!

Have I bombarded you with enough words and enough "me" "my" "I" ?!  I am sick of myself so you must be too.  So Adios and I am beading a little...simple peyote.  Hopefully the next post will be almost no words, but some jewelry.  Fingers crossed!
Posted by Christine Altmiller at 12:42 PM 4 comments:

2016 is not off to a strong start for this lonely little Blog.
There is a lot going on at home (all good, just too much for my preference) and I am too scattered to do much of anything for myself.  When I have a few moment of Me time, I prefer to sit in silence.  But I also am feeling the pull to get back to using my Me time more productively...not that stillness isn't productive, because it sure is needed for recharging. 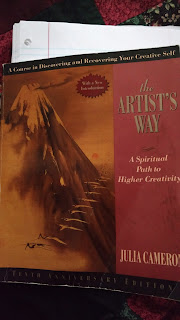 So I decided to do The Artist's Way by Julia Cameron again.  The last time I did it was probably 5 years ago and it took me 9 full months to do a 12 week course.  This time, I am hoping to do it in 12 weeks, but will allow myself 6 month, if necessary.  Progress ;-)

Each week, there is a chapter to read and tasks to do.
Throughout the whole 12 weeks, and presumably forever, two of the constant tasks are to write Morning Notes and take oneself on an Arist's date.  Morning Notes are 3 full pages of writing before the day begins on anything that pops into the head.  Since my day begins at 5:45, I refuse to get up earlier to write the notes, so I have reset the time to accommodate my schedule rather than the best time to empty my mind for a clean, clear start to the day.  When I did this 5 years ago, I went from resenting the Morning Notes to looking forward to them.  It is a great way to purge.  Feel it...and let it go.

The Artst's Date was not what I was hoping for, especially not for week one.  I was hoping to go see The Danish Girl.  My schedule for the week could not accommodate this.  By last night, it was looking like Week One would have me fall short already.  And then this Gordon Lightfoot concert came up in my Facebook feed.  And I decided this would be my Artist Date for the week.  I will not make a habit of it, because the dog was a nudge and the phone kept ringing and it was easy to get distracted while I tried to have a home based Artist Date with myself.  All that being said, it was time well spent with Gordon and the nuances of his voice and those words that just transport me to another time and place in my life.  Shallow me misses his beard in this one, but he is in fine voice.

One of the tasks for this week was to make a list of wish careers then play one out.  My list, among others, included singer and painter.  So I tried my damnedest to play and sing some Lucinda Williams.  But that left me unsatisfied so I dug out these itty bitty white canvases and while it was a fail, it was fun and not too time consuming.  Success is not important.  The process is.  And I really enjoyed jamming to Led Zepplin and painting four wee canvases black.

Have you ever done The Artist's Way?  More than once?  I am thinking it might be just what I need to feel inspired about beading again.  And Blogging for that matter.  I remember it helped a lot the last time I did it.  But like most things that require optional dedication, I let the Morning Notes and Artist's Dates fall by the wayside.
We'll see how it goes this time around!
Posted by Christine Altmiller at 2:53 PM 7 comments: