She Made ~ She Made : August

Blogging in summer is not my thing.  I don't miss writing my own blog nearly as much as I miss visiting all my favorite blogs.  But, it is the way I have always lived...I am "on" 10 months out of the year and need 2 months of down time.  The perpetual school calendar mixed with spending childhood summers in a different town left me in that cycle that I am not really interested in breaking. I see as few people as possible during the summer.  I just need to empty my head for a while.  The girls keep me busier than I would like, but that is probably good for me.  On top of my usual summer reclusiveness (spell check says this is not a word.  I say "screw you spell check"), my computer died early summer.  I sent it to HP and it came back still dead, so I sent it out AGAIN.  It came back and is seemingly ok, but with several blips, so I have zero faith in this now after LOVING it for a year.  The mid-summer July post on the blog was actually written up and set to post sometime in early June, when my chromebook and I were still were still passionately involved with each other.  So at least I got to participate in the last of the CC7A posts, thanks to my against-character early finish/photos/write up.  I apologize to anyone who left comments in June and July.  I like to e-mail replies to the comments and I just gave up trying to do it on my phone.  I still may get around to you yet!

I told myself all summer, I would blog again in September, but when Therese suggested a She Made~She Made on the last day of August, I figured, "Close enough."  She picked these beads, though the agates she gave me are more of a mustard color. 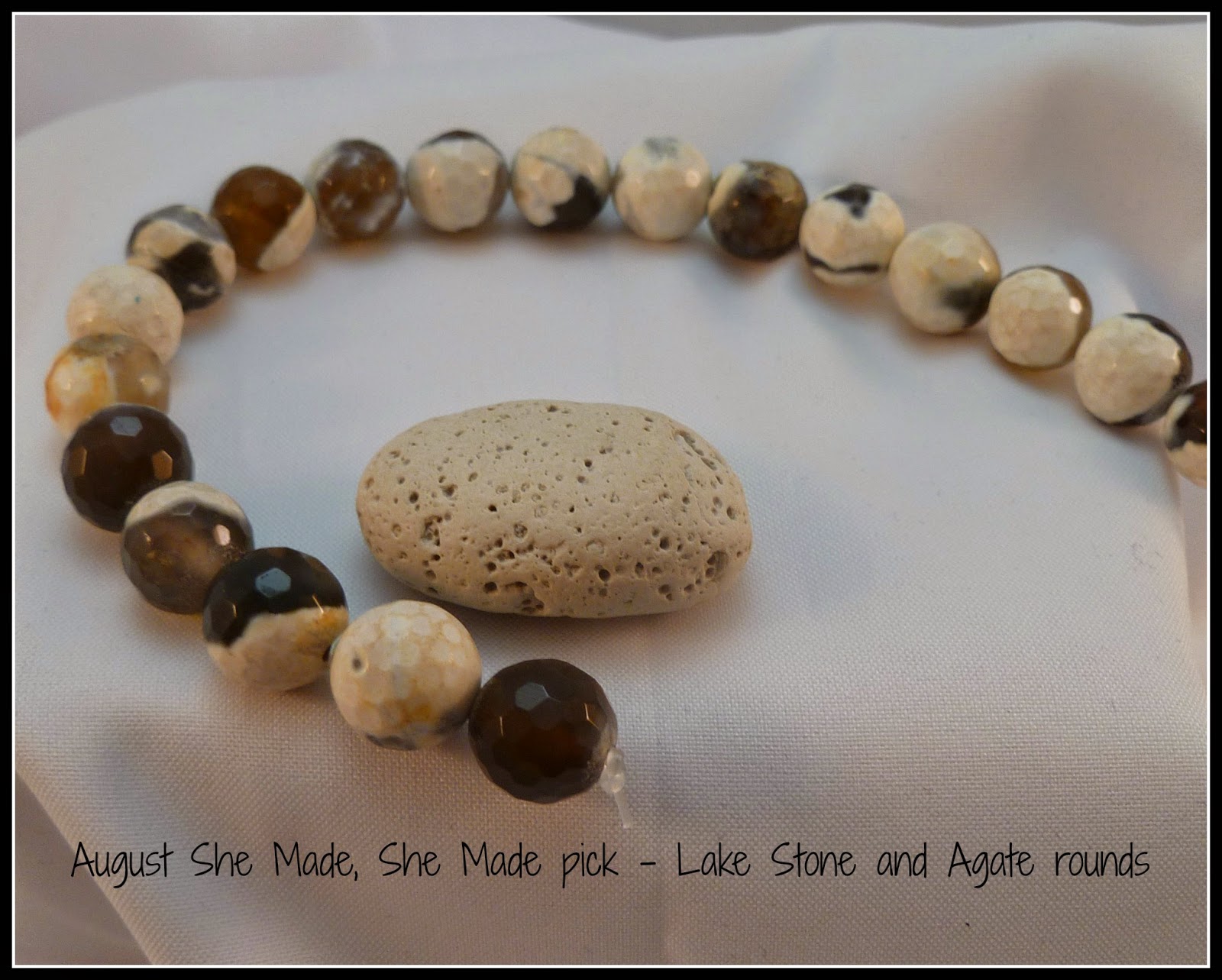 I had no idea what to do with the mustard agates.  They were tough beads for me to plan around.  I fondled them and kept them in my pocket for a few days.  One day, I was sorting through my rocks from Lake Michigan (the one Therese chose).  I have a lot of them.  They are called Stink Stones, but they look like the moon to me.  I found one that had a hole going all the way through.  I got so excited that I didn't have to drill or bezel and in my excitement, I spilled a container of metal findings and beads.  As I was picking them up, I saw the bell beads.  I cut them off my bell hippie pants I used to wear when I would go to the polls each November (wearing my rag wool socks and Birkenstocks).  I liked the idea of mixing the polished agates, lake stone, and metal.  So I added a few seed beads and strung and knotted it all on an orange Silk Cloud Mini from Darn Good Yarn. 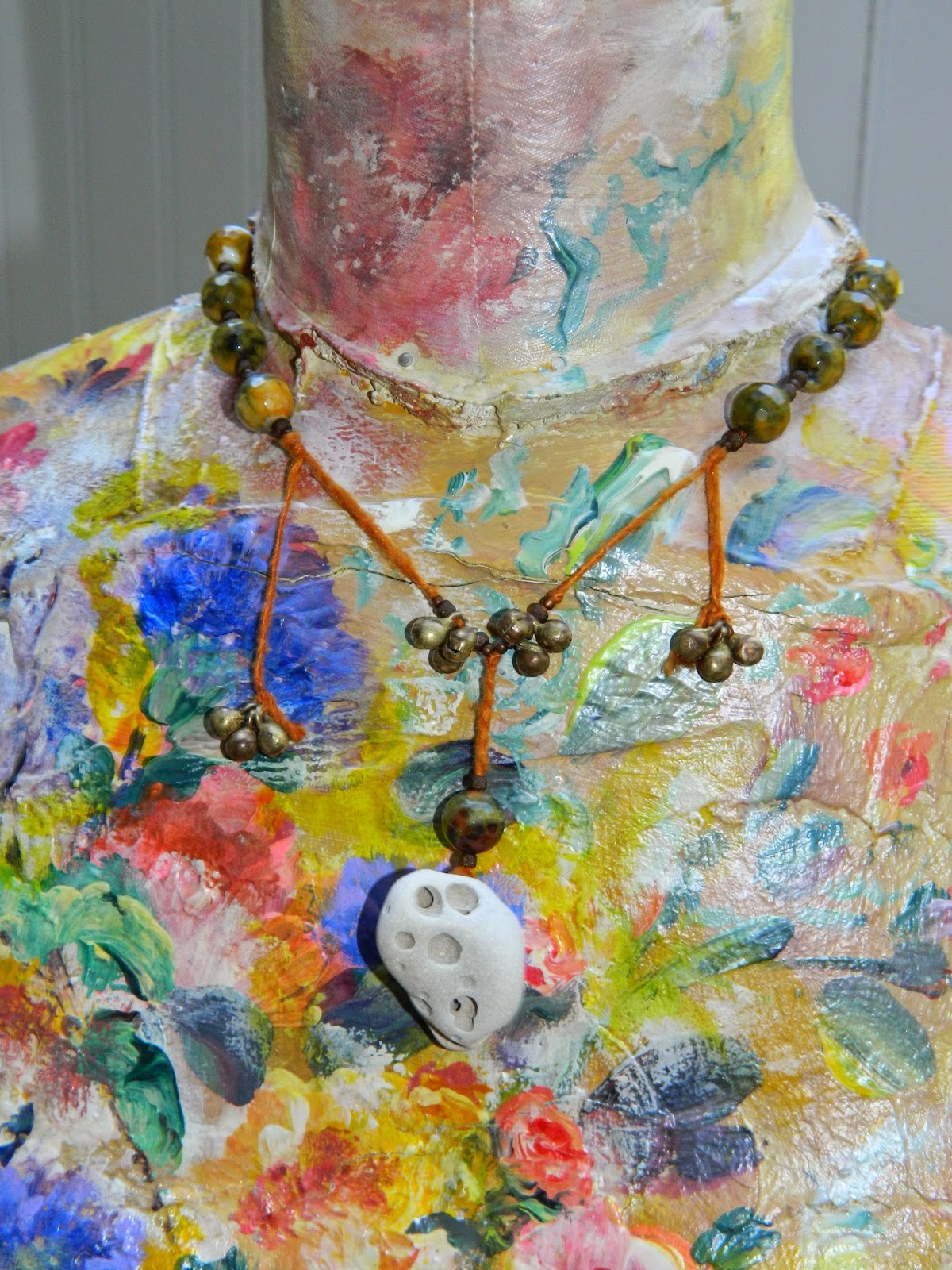 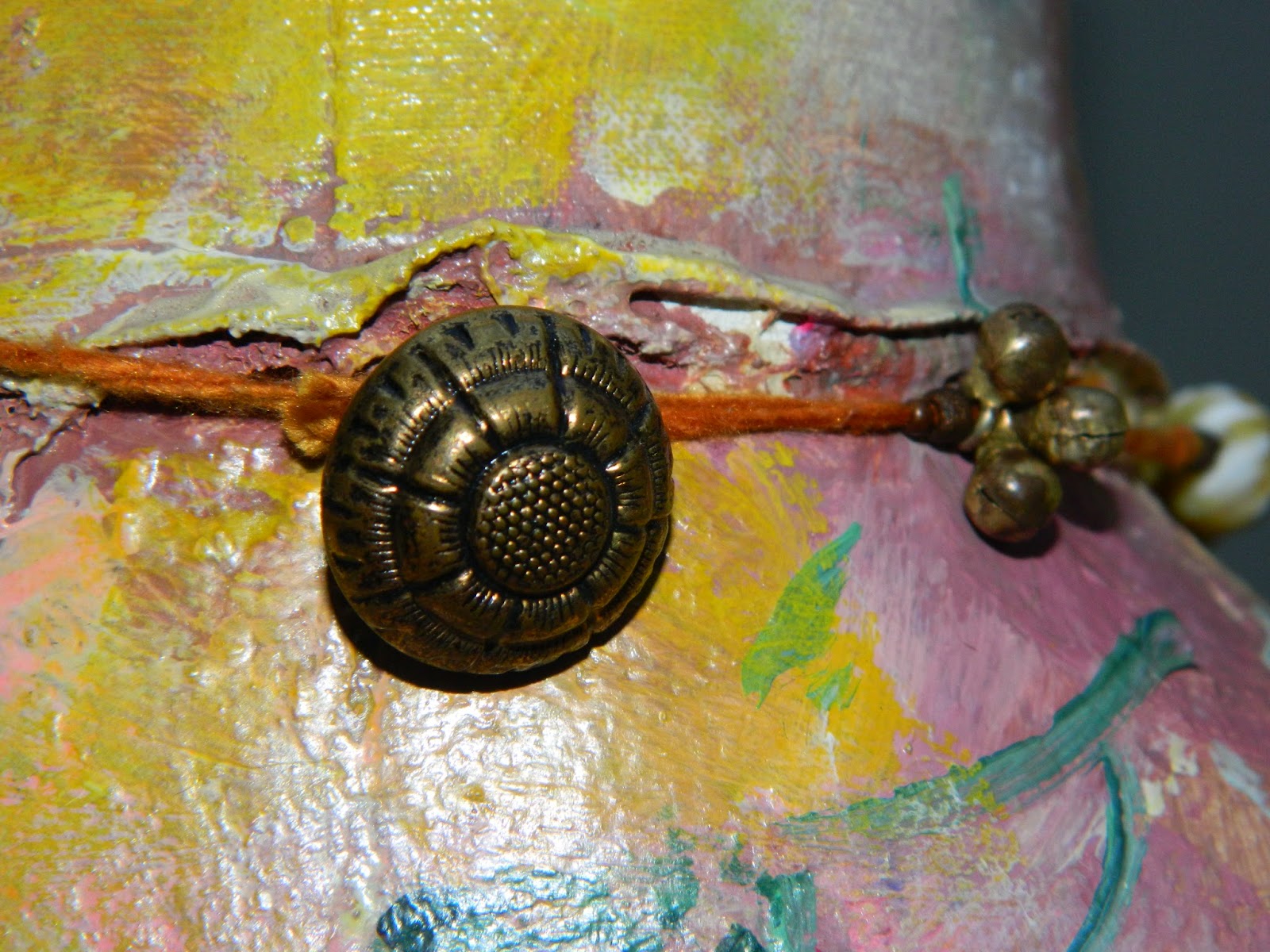 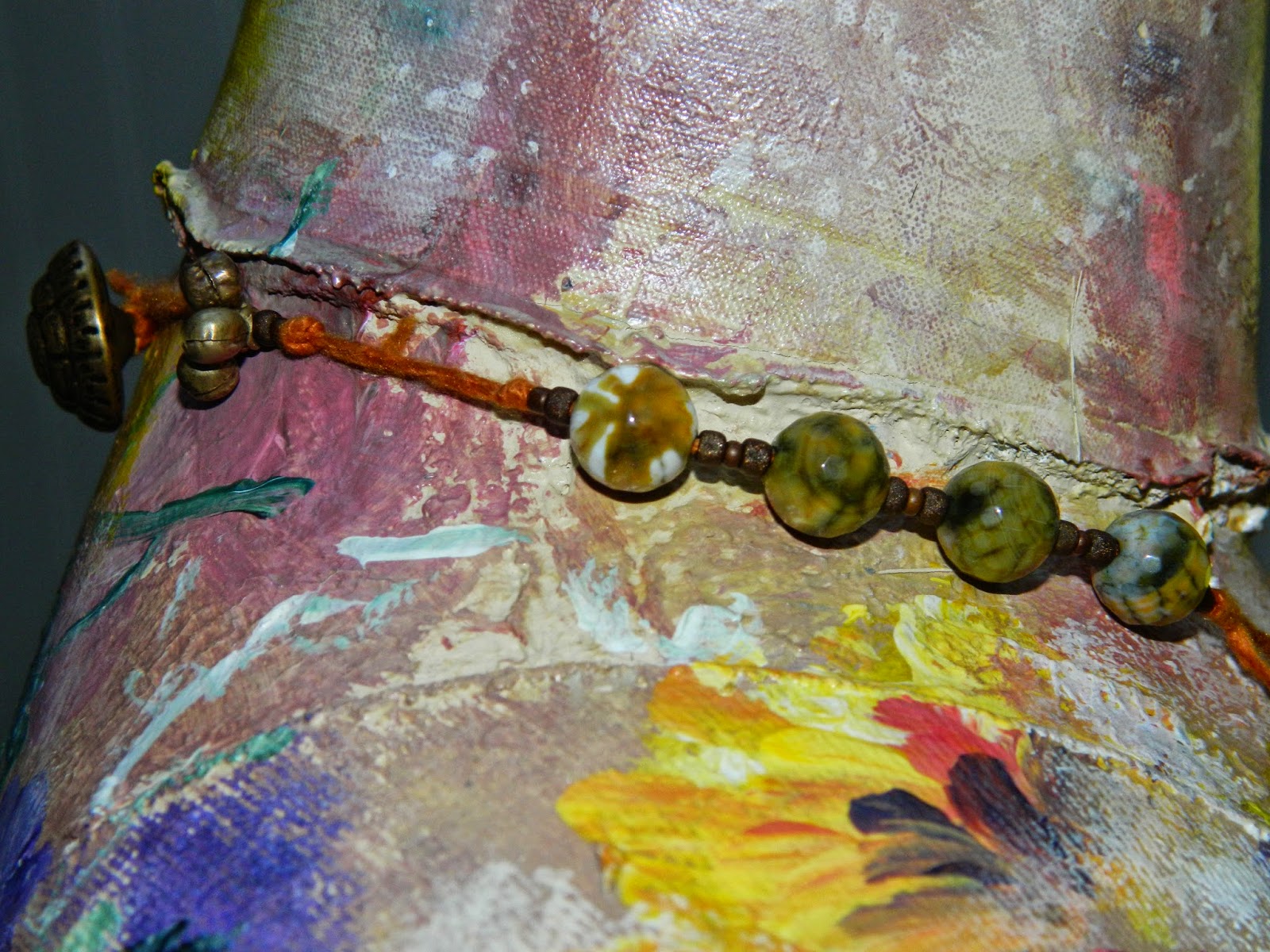 (button from my Gram's stash) 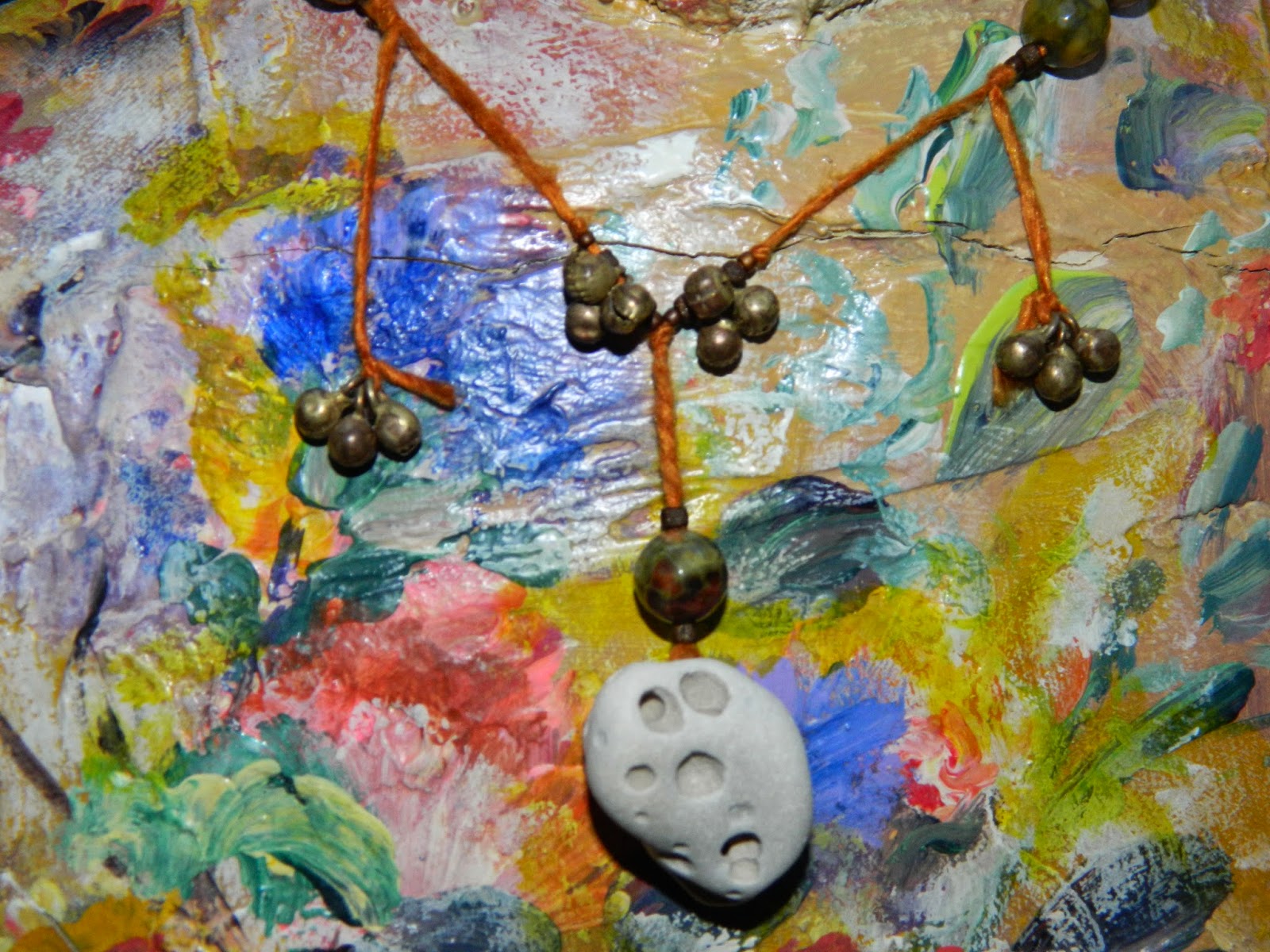 Maybe I can wear this to a concert and make a little music myself when I dance :-)  I love the sound these bells make.
Thanks for reading and for coming back and for being a part of my world.  And Thanks Therese ~ you gave me the kick I needed to get back here again :-D
Posted by Christine Altmiller at 12:30 AM 12 comments: