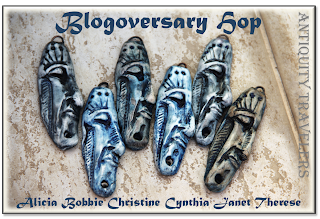 Cynthia asked Alicia, Bobbie, Janet, Therese, and me to join her in her Blogoversary celebration and today is Party Day!!!  She sent us all these gorgeous faces to work with.  We got some other items...some made it to the final project, some provided me with unmentionable language.  More on that in a moment.


Happy Two Years of Blogging Strong, Cynthia!  I can honestly say, meeting you has changed my life...in the best of ways. Thanks for asking me to be a part of this event.  You know how I feel about you...and it is not just for your beads...I'd love ya if you were beadless ;-)

The package arrived in the mail...in it was the focal face bead, sky blue frosted AB seed beads, white oval beads of unknown origin (i am leaning toward an agate of some type, though they could be bone), and white reclaimed sari ribbon from Darn Good Yarn.  The focal was made by Jana of Happy Fish.
I hatched a plan early on...like immediately!
As soon as I saw the face, I laughed as I said out loud to no one not even the dog, "Sleeping Indian."  Back in my Colorado Daze, it seems as though every town in the Rockies overlooked a range the locals called "Sleeping Indian."  There must have been dozens.  I took it as a joke after a while.  But they were all serious when they said the name of the range.  This guy...he had to be a Sleeping Indian Mountain Range...from Buena Vista or Creede or Durango or Gunnison or Frisco or Twin Lakes.  Take your pick!  I am sure there are a few dozen in New Mexico and Wyoming that I saw along the way.
So I had a loose plan...he needed to be a mountain range.  The blue beads needed to represent water and sky, the white beads-snow, the white sari-clouds.  Then the language began.  I tried every method I knew (even incorporating wire, if you can believe that!  me...wire!!!) to make that damn sari look like clouds.  I gave up.  So then the white beads became the clouds.  But the way I did it was so tailored.  What in the Rockies is tailored?!  It is nature for goodness sake!  Then there was the issue of the Sleeping Guy himself.  He would lay down but he just didn't look right.  Cut.  Cut.  Cut.
I put it down for weeks.
I decided that ALL the Sleeping Indian Ranges in the Rocky Mountain region were conspiring against me.  Having majored in Anthropology and American Indian Studies in college, I knew when to reign it in---when to stop poking fun at something I guess I didn't really understand after all.  And I didn't understand how so many towns could have the same name range.  But I wasn't a local so how could I understand.  I was only passing through for 7 years.
And then my mind opened up.  And this came to be.  I smoothed his back by draping these red beads under him (courtesy of Liz from Bead Contagion.  Thanks Liz! They saved the day in yet another project!) and gave him movement and fringe with the original blue and white beads.  Still snow and rain and sky and clouds and water...and the color red...just not so much.  I still had no idea of how to support him, which made me pause for another week or so.  In the end, I decided he should be a pin.  Keep the focus on Jana's artistry, with my simple additions.  To say this was a challenge is an understatement.  But like all good things, this was one worth seeing through to the end.  Thanks Cynthia...for absolutely everything. 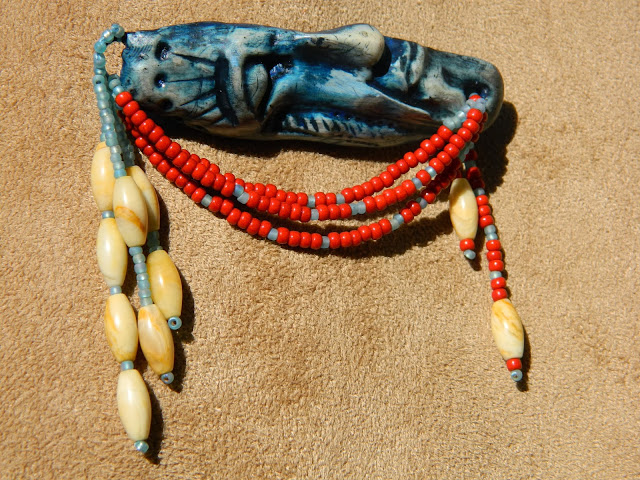 I cannot wait to see what the rest of the Ladies created!

Posted by Christine Altmiller at 12:30 AM

We went just the opposite way: yours is sleeping, mine is dancing!
But oh, I so love your Sleeping Indian (hope nobody is offended by the non-political correct term) and the red beads are just perfect! Love the 'bone' ovals too, a nice gentle touch! Beautiful work.

Hi Christine,
Wow love the end result of your Sleeping Indian he is gorgeous in his sleeping state. You still have the sky and clouds and beautiful fall red colored tree line. I agree this was not as easy as it first seemed, but well worth the end result. Awesome job!
Therese

I love your final product, Christine! The red beads and the fringe really set off the Sleeping Indian! Fantastic!

This is so cool and super creative! I love it!!! It's very original.

Girl, my mouth dropped open when I saw your final product! What a very cool and wonderful Sleeping Indian -- the red beads and the fringe are the perfect complement to the mood you were working to capture. I wrestled with this baby, too (okay, it's not as much fun if it's not a challenge), and the silk defeated me, too. But you may see it soon in another incarnation...

I love your sleeping 'lug' ! it is so tribal and fluid with the beads ... almost like a headdress! It is so perfectly you and your style - I absolutely LOVE it! I had to laugh at how we all seemed to have had our moments with this guy! But I am loving how everyone has their own unique interpretations - even tho we both have a sleeping giant/indian, each mountain range is different as you know!

And thank heavens I'm not beadless! ack! but good to know you'd like me anyways :)

These Sleeping Indians are so cool! Although tricky to work with. I love how the pin came out! The frustration was worth it.

Maybe residents of the Rockies decided to call multiple ranges the same name to baffle us non-locals!

I fought with laying him down and look at you! Love this - definitely has a native American look to it.

I also don't think I knew you majored in Anthropology. Believe it or not, that was to be my major before I made some young adult choices that took me away from it. I still have some of my favorite text books from that time.

Man, those red beads are perfection! And yes, a headdress!! Love that you made this a pin - PEOPLE DON'T WEAR ENOUGH PINS ANYMORE! I used to slap one on my suit lapel back in the day! Truly beautiful creation!

Lovely piece, I'm a big fan of pins and this one has beautiful texture and movement.
Cheers!
Lori in Atlanta

I love the red with the sleeping Indian. Your pin is gorgeous!

I would have never in a million years thought to put red in there. I love your interpretation. Making it into a pin was a wonderful idea.

I love that you have him gazing skyward in your pin! And the dangles remind me of those huge stands of Aspen trees that would be in full Autumn color now. Fun!

What a really neat idea. The mountain range thing is pretty funny and makes you wonder. . .
Anyway, I think turning this into a pin was inspired. I love the dangles from it and the pop of color you added! Well done.