This week,
Thursday's Thing*
is my well traveled, constant companion. 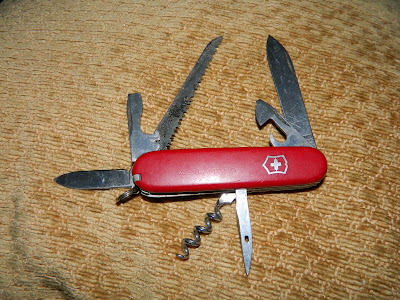 My Brother gave me this knife for my 18th birthday.  I remember it was my 18th only because I remember the first thing I carved with it.  My lover's initials...in my leg.  I am not a cutter, not then and not now.  I just didn't believe that this little knife was all that sharp.  I figured it would just scratch the initials into the side of my calf and when I woke up in the morning, it would be gone.  I was so wrong.  From the knee to the ankle was a Big "JRE" on my leg.  It wasn't until I reached the end of the last letter that the first letter started to bleed.  It was then I realized 2 things.  One~this knife was sharp!  Two~I was screwed.  So screwed.  The first reason I was screwed was because I was going to the orthopedic surgeon in a few days.  He would see it and so would my Mom.  The second way I was screwed was because my boyfriend's initials were "FG", NOT "JRE".  I had a boyfriend whom I was trying to leave, and a lover I wanted to have as my only one.  "FG" and I were complicatedly tangled together but I didn't want to be.  I wanted out.  And "JRE" came along and was more to my liking.  So there he was, carved on my leg.  It was the end of October.  I could only hope that the pants I wore would cover up the carving so that "FG" wouldn't see it.  So pants and knee-high socks prevented the Angry Man Rage "FG" flew into when parents we not around.  He never saw.  I eventually untangled myself from him.  It wasn't pretty, but neither were we.

This knife has been the majority of the States, including Alaska.  It has been to 6 European nations.  It has been to Canada.  It has spent a few hours in Juarez, Mexico.  It has gone to football games and hockey games.  It has backpacked through the Rockies many times and through the Alps once.  It commuted to NYC with me for 6 months. It has opened many bottles of red, red wine.  It has lived in a lot of different houses and purses and backpacks and cars.  Like any good Swiss Army knife, it dutifully lost its toothpick within the first month.  But the tweezers remain and are the most used item on this baby.

The day I lost it, my heart sank.  I realized I lost it, retraced my steps and could not find it.  I looked for it every single day for 2 months.  I finally gave up.  I was going to buy a new one.  But my heart wasn't in it (I know, I know, it is just a knife!) and I kept putting it off.  Not long after I gave up, I was at my parents' bungalow in NJ.  I was standing in the driveway and popped my trunk to take my suitcase out and THERE IT WAS, in the little gully where the trunk door and body of the car meet!!!  I had opened and closed that trunk almost every day during those months it was missing.  How I didn't see it, I will never know.  But it was back.  This was pre-kids.  It may have even been pre-Birdman.  So it was another lifetime ago.  But since its recovery, it has always been accounted for when I leave the house and when I return.

Posted by Christine Altmiller at 9:05 AM

I guess the knife's story wasn't done with you! I'm glad you found it. I think back to some gifts I was given as a child and a couple I lost and never found. Maybe hope is not lost?

Loved the way you told your story - made me laugh, but also made me hope it was going to turn out okay in the end. Do your girls read your blog?

I can't imagine you cutting initials into your leg, but I am glad that your Swiss army knife has come in handy. I love thinking about you doing all of that traveling, the word Bohemian comes to mind when I think of you today!

I love knowing all this about you and I'm so happy your little knife waited for you to find it again!
Girl, you have done some serious travelin'! explains alot!

what fun travels! a girl after my own heart :) Man ... that leg had to hurt! So glad you found your knife again ... my husband recently did this with his camera. A small canon ... we looked everywhere for it, for weeks. Then he gave up and bought a new one the week before we left for SF. The exact same one. And of course, the night before (I kid you not) it fell out of his backpack as he was organizing for the flight the next day. We now own 2 of his favorite cameras.

Oh, lordy, I hope you found a less painful way to test blades after that!! It is comforting, though, to have talismans that have followed you throughout your life, even if part of the time this one was accompanying you from a well-hidden spot.

Agree, Chris, they don't look sharp, my Dad had one and told me to be careful handling it, the blades look thick and bulky-to my mind, dull. Hope your Mom didn't have a fit worrying about the leg. Did the initials fade? Glad you found your knife!

Christine, you make me laugh! The carving in the leg is so funny, yet so horrible at the same time. What a memory! I have never owned one of these but they seem like such a handy little thing to carry around at all times. Especially for opening wine bottles!

LOOOOOOOOVED this story!!! Thank you for sharing!!!!!!