This is what 44 years of Love looks like.
Beautiful in the Eye of the Beholder. 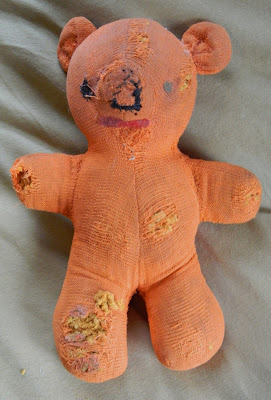 He has had one full face transplant, and a half one (eye and mouth) a few years after that.  Mom did the first full transplant.  When it came time again, she told me to do it.  She was angry that I pulled off the original one and also half the one she painstakingly sewed on.  He has had a tracheotomy, ear surgery, and spine surgery.  He has open wounds all over his body because I pulled off each and every terry cloth loop that was on him, which weakened his skin.  I didn't mean to do that or tear off his face twice.  I was put in my room to nap and I wasn't a napper.  So this is what I did to pass the time quietly.  Now that I am writing this all out, I am wondering about the "Love" aspect.  Seems in my younger days,  my love was a bit sadist.  Thankfully, I grew out of that stage and showed him a more proper Love. 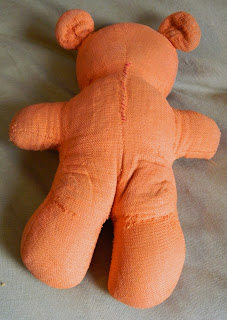 When I was preparing to move away from home to Colorado, it was suggested that he was too weak to make the trip.  Me and Orangy, separated?!  NEVER.  So Mom knitted a ski suit for him, more to keep his bits and pieces in place rather than for warmth.  Orangy drove with me countless times between Colorado and New Jersey.  He always sat in the front passenger seat with his seat belt on.  I know he is the reason why the officer in Iowa only gave me a warning.  He smiled big when he saw Orangy, gave me a fatherly talkin' to, a written warning, and told me it was time for me to pull over for the night and that there was a Super 8 coming up in Grinnell.  I took his advice.  When I checked in at the front desk, the clerk told me the only room available was the Honeymoon Suite.  Didn't know Super 8s had such a room.  I told her I would take it.  She asked if I had a Honey in the car to share the room with.  I told her I did.  When I walked by her desk with my bags, I waved Orangy in front of her and said, "My Honey."  She insisted that he simply wouldn't do and once I saw the honeymoon suite I would know why and then handed me a card.  On it was the number for a local pizza joint.  She said they deliver and that the delivery boy would be someone I would want to have stay in the honeymoon suite with me.  !!!  Yikes! Damn if I wasn't hungry and too tired to go out.  So I called, had it delivered, and found him to be cute and of age and then some, but not THAT cute.  The next morning, the clerk was still there and said with a wink and a smile, "So...how was that pizza last night?"  I told her it was the best darn pizza I ever ate and when I pass through again, I will certainly call for more.  As for the honeymoon suite...it was a normal Super 8 room...with wall to wall mirrors and mirrors on the ceiling!!!

When I graduated college, I went to Alaska for a few weeks then to Europe for 6 weeks.  I debated about bringing Orangy.  He was so fragile.  I left him at my house when I was in Alaska,  but wasn't sure I wanted to leave him home all those weeks I was in Europe.  I went round and round in my head and then finally said it out loud to a few people.  They all told me I was nuts and that he couldn't handle the backpacking I would be doing.  So I left him home.  For years and years, decades actually, I have this reoccurring dream that I took him with me and when I toured Versailles, I found bits and pieces of him in every room of the palace. 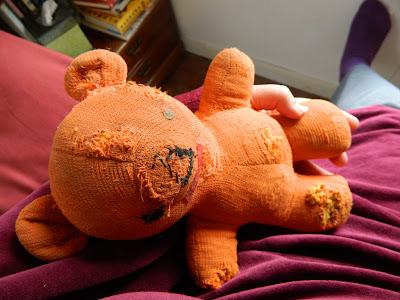 When the BirdMan and I moved in together, Orangy still slept with me like he always did.  The BirdMan let if go for the first two years, then he gently said it was time to give up the bear.  It was a sad night for me the first time I put him on the nightstand.  I miss having him in the crook of my arm.  I slept that way for 27 years.

Now that I beadweave, I thought of weaving him some protective clothing.  Or maybe a suit of armor out of chain maille.  He still wears his knitted suit my Mom made for him. But I wanted to show him au natural here.

When I die, he will be cremated with me.  He was with me from the day I was born and he will be with me when I go.  No one in the family appreciates him like I do.
He is my Orangy and I love him.


Posted by Christine Altmiller at 10:14 AM

I love this Miss Christine. I had Ellie the Elephant. I yanked out her string that played music, and chewed on her nose. I am not sure where she is right now, but you have inspired me to go and find her! I have my mom's and dad's teddies, too, and they have that same well loved look. Your Orangey is a very real part of your life and your story brought tears to my eyes! Thank you for sharing. Enjoy the day. Erin

Oh, Christine, my darling daughter has a Snuffle bear that is just like you Orangey. She's had her since she was 2 years old and she is well loved. Snufs goes everywhere with her even after 27 years. She lives at Carrie's home now, but we still talk about her! Thank you for sharing your story about Orangey. I'm going to share it with my daughter.

What a cool post today! I wish I had an Orangy! I had a fear of dogs when I was little, probably because I was bit in the tush by a huge doberman pincher! So, when I was 8 years old, my parents bought me Bernie - The St. Bernard. He was LIFE SIZE - swear! I loved Bernie, but he was too big to travel with me! I was in my late 20's when I had to say goodbye forever to Bernie... Wow...I have not thought about Bernie in YEARS! Thanks for bringing that memory back to me!

What a great story! I never had a sleeping toy, but my daughters do. Kate's was a polar bear, which she still has. He is flat as a pancake now, but she would not part with him. I've asked from time to time when we clean out her room as she grows up. Answer is still 'no, he stays.'

This was so great! Give Orangey a (gentle) hug from me. Makes me wish I'd have a lovey like that growing up...

O MY GOODNESS!!! This is exactly like a post I'd been thinking of doing -- a tribute to my beloved bear, whom I've had since I was born, and still cuddle now -- yes, 40 some years of love, friendship and loyalty! I'm so glad to know that there are other strong teddy bonds in the world :))

Hi Christine,
This is a wonderful story I enjoyed reading and learning all about your life long companion Orangy. I do not have a stuffed companion, but I do have the dresser that I slept in when I was an infant it has been with me for 53 years and I am still using it.
Therese

Orangy is the most loved bear I've ever seen, just looking at him and reading that account made me tear up, too. I once cut the hair off my doll, so know what pulling the loops out must have been like.

That Honeymoon Suite anecdote was funny!

Hope you and Orangy stay with us for many more years! ♥

I truly love this sweet story, Christine, and I thank you for sharing it.

Such a wonderful story of your beloved Orangy. Touching with funny bits. It definitely brings back memories of how attached and sentimental we get about our "treasures". I was going through our storage where we still have lots of stuff and found some Care Bears that my daughter had as a kid. I had to bring them to the house as I felt guilty leaving them there by themselves. Didn't want them to be cold and lonely! :)

Goodness! Orangy is AWESOME!!! This was a very touching post Christine, thank you for sharing. I hope you will bead Orangy something special - I think it would be so perfect!

Oh Christine! You are so funny! Orangy is so adorable and special. At the beginning of your post I was thinking what a violent childhood you had between destroying your teddy and carving initial into your skin! I think it is awesome that you have kept this little guy around for decades.